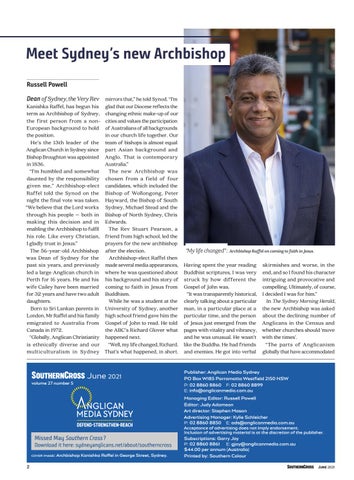 Meet Sydney’s new Archbishop Russell Powell Dean of Sydney, the Very Rev mirrors that,” he told Synod. “I’m Kanishka Raffel, has begun his term as Archbishop of Sydney, the first person from a nonEuropean background to hold the position. He’s the 13th leader of the Anglican Church in Sydney since Bishop Broughton was appointed in 1836. “I’m humbled and somewhat daunted by the responsibility given me,” Archbishop-elect Raffel told the Synod on the night the final vote was taken. “We believe that the Lord works through his people – both in making this decision and in enabling the Archbishop to fulfil his role. Like every Christian, I gladly trust in Jesus.” The 56-year-old Archbishop was Dean of Sydney for the past six years, and previously led a large Anglican church in Perth for 16 years. He and his wife Cailey have been married for 32 years and have two adult daughters. Born to Sri Lankan parents in London, Mr Raffel and his family emigrated to Australia from Canada in 1972. “Globally, Anglican Christianity is ethnically diverse and our multiculturalism in Sydney

glad that our Diocese reflects the changing ethnic make-up of our cities and values the participation of Australians of all backgrounds in our church life together. Our team of bishops is almost equal part Asian background and Anglo. That is contemporary Australia.” The new Archbishop was chosen from a field of four candidates, which included the Bishop of Wollongong, Peter Hayward, the Bishop of South Sydney, Michael Stead and the Bishop of North Sydney, Chris Edwards. The Rev Stuart Pearson, a friend from high school, led the prayers for the new archbishop after the election. Archbishop-elect Raffel then made several media appearances, where he was questioned about his background and his story of coming to faith in Jesus from Buddhism. While he was a student at the University of Sydney, another high school friend gave him the Gospel of John to read. He told the ABC’s Richard Glover what happened next. “Well, my life changed, Richard. That’s what happened, in short.

“My life changed”: Archbishop Raffel on coming to faith in Jesus. Having spent the year reading skirmishes and worse, in the Buddhist scriptures, I was very end, and so I found his character struck by how different the intriguing and provocative and Gospel of John was. compelling. Ultimately, of course, “It was transparently historical, I decided I was for him.” clearly talking about a particular In The Sydney Morning Herald, man, in a particular place at a the new Archbishop was asked particular time, and the person about the declining number of of Jesus just emerged from the Anglicans in the Census and pages with vitality and vibrancy, whether churches should ‘move and he was unusual. He wasn’t with the times’. like the Buddha. He had friends “The parts of Anglicanism and enemies. He got into verbal globally that have accommodated