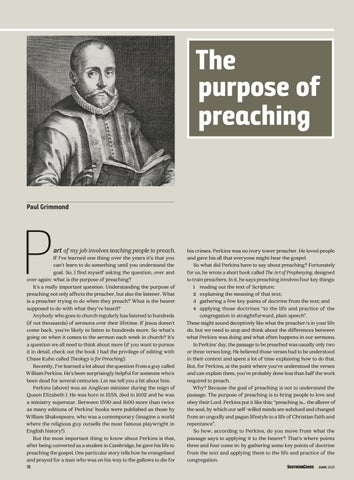 The purpose of preaching

art of my job involves teaching people to preach.

If I’ve learned one thing over the years it’s that you can’t learn to do something until you understand the goal. So, I find myself asking the question, over and over again: what is the purpose of preaching? It’s a really important question. Understanding the purpose of preaching not only affects the preacher, but also the listener. What is a preacher trying to do when they preach? What is the hearer supposed to do with what they’ve heard? Anybody who goes to church regularly has listened to hundreds (if not thousands) of sermons over their lifetime. If Jesus doesn’t come back, you’re likely to listen to hundreds more. So what’s going on when it comes to the sermon each week in church? It’s a question we all need to think about more (if you want to pursue it in detail, check out the book I had the privilege of editing with Chase Kuhn called Theology is for Preaching). Recently, I’ve learned a lot about the question from a guy called William Perkins. He’s been surprisingly helpful for someone who’s been dead for several centuries. Let me tell you a bit about him. Perkins (above) was an Anglican minister during the reign of Queen Elizabeth I. He was born in 1558, died in 1602 and he was a ministry superstar. Between 1590 and 1600 more than twice as many editions of Perkins’ books were published as those by William Shakespeare, who was a contemporary (imagine a world where the religious guy outsells the most famous playwright in English history!). But the most important thing to know about Perkins is that, after being converted as a student in Cambridge, he gave his life to preaching the gospel. One particular story tells how he evangelised and prayed for a man who was on his way to the gallows to die for 18

his crimes. Perkins was no ivory tower preacher. He loved people and gave his all that everyone might hear the gospel. So what did Perkins have to say about preaching? Fortunately for us, he wrote a short book called The Art of Prophesying, designed to train preachers. In it, he says preaching involves four key things: 1 reading out the text of Scripture; 2 explaining the meaning of that text; 3 gathering a few key points of doctrine from the text; and 4 applying those doctrines “to the life and practice of the congregation in straightforward, plain speech”. These might sound deceptively like what the preacher/s in your life do, but we need to stop and think about the differences between what Perkins was doing and what often happens in our sermons. In Perkins’ day, the passage to be preached was usually only two or three verses long. He believed those verses had to be understood in their context and spent a lot of time explaining how to do that. But, for Perkins, at the point where you’ve understood the verses and can explain them, you’ve probably done less than half the work required to preach. Why? Because the goal of preaching is not to understand the passage. The purpose of preaching is to bring people to love and obey their Lord. Perkins put it like this: “preaching is… the allurer of the soul, by which our self-willed minds are subdued and changed from an ungodly and pagan lifestyle to a life of Christian faith and repentance”. So how, according to Perkins, do you move from what the passage says to applying it to the hearer? That’s where points three and four come in: by gathering some key points of doctrine from the text and applying them to the life and practice of the congregation. SouthernCross