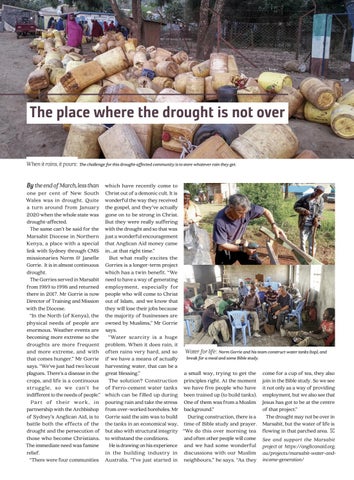 The place where the drought is not over

When it rains, it pours: The challenge for this drought-affected community is to store whatever rain they get.

By the end of March, less than which have recently come to one per cent of New South Wales was in drought. Quite a turn around from January 2020 when the whole state was drought-affected. The same can’t be said for the Marsabit Diocese in Northern Kenya, a place with a special link with Sydney through CMS missionaries Norm & Janelle Gorrie. It is in almost continuous drought. The Gorries served in Marsabit from 1989 to 1998 and returned there in 2017. Mr Gorrie is now Director of Training and Mission with the Diocese. “In the North (of Kenya), the physical needs of people are enormous. Weather events are becoming more extreme so the droughts are more frequent and more extreme, and with that comes hunger.” Mr Gorrie says. “We’ve just had two locust plagues. There’s a disease in the crops, and life is a continuous struggle, so we can’t be indifferent to the needs of people.” Par t of their work, in partnership with the Archbishop of Sydney’s Anglican Aid, is to battle both the effects of the drought and the persecution of those who become Christians. The immediate need was famine relief. “There were four communities

Christ out of a demonic cult. It is wonderful the way they received the gospel, and they’ve actually gone on to be strong in Christ. But they were really suffering with the drought and so that was just a wonderful encouragement that Anglican Aid money came in...at that right time.” But what really excites the Gorries is a longer-term project which has a twin benefit. “We need to have a way of generating employment, especially for people who will come to Christ out of Islam, and we know that they will lose their jobs because the majority of businesses are owned by Muslims,” Mr Gorrie says. “Water scarcity is a huge problem. When it does rain, it often rains very hard, and so if we have a means of actually harvesting water, that can be a great blessing.” The solution? Construction of Ferro-cement water tanks which can be filled up during pouring rain and take the stress from over-worked boreholes. Mr Gorrie said the aim was to build the tanks in an economical way, but also with structural integrity to withstand the conditions. He is drawing on his experience in the building industry in Australia. “I’ve just started in

Water for life: Norm Gorrie and his team construct water tanks (top), and break for a meal and some Bible study.

a small way, trying to get the principles right. At the moment we have five people who have been trained up (to build tanks). One of them was from a Muslim background.” During construction, there is a time of Bible study and prayer. “We do this over morning tea and often other people will come and we had some wonderful discussions with our Muslim neighbours,” he says. “As they

come for a cup of tea, they also join in the Bible study. So we see it not only as a way of providing employment, but we also see that Jesus has got to be at the centre of that project.” The drought may not be over in Marsabit, but the water of life is flowing in that parched area.SC See and support the Marsabit project at https://anglicanaid.org. au/projects/marsabit-water-andincome-generation/