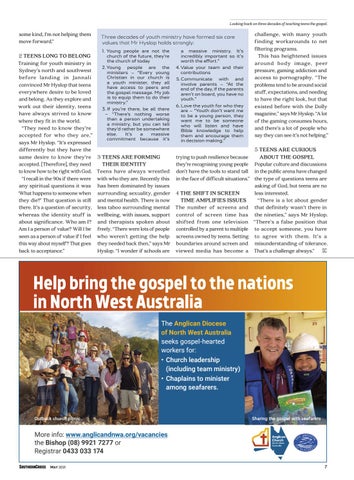 Looking back on three decades of teaching teens the gospel.

some kind, I’m not helping them move forward.”

2 TEENS LONG TO BELONG Training for youth ministry in Sydney’s north and southwest before landing in Jannali convinced Mr Hyslop that teens everywhere desire to be loved and belong. As they explore and work out their identity, teens have always strived to know where they fit in the world. “They need to know they’re accepted for who they are,” says Mr Hyslop. “It’s expressed differently but they have the same desire to know they’re accepted. [Therefore], they need to know how to be right with God. “I recall in the 90s if there were any spiritual questions it was ‘What happens to someone when they die?’ That question is still there. It’s a question of security, whereas the identity stuff is about significance. Who am I? Am I a person of value? Will I be seen as a person of value if I feel this way about myself? That goes back to acceptance.”

Three decades of youth ministry have formed six core values that Mr Hyslop holds strongly: 1. Young people are not the church of the future, they’re the church of today

a massive ministry. It’s incredibly important so it’s worth the effort.”

2. Young people are the ministers – “Every young Christian in our church is a youth minister, they all have access to peers and the gospel message. My job is to equip them to do their ministry.”

4. Value your team and their contributions

3. If you’re there, be all there – “There’s nothing worse than a person undertaking a ministry, but you can tell they’d rather be somewhere else. It’s a massive commitment because it’s

5. Communicate with and involve parents – “At the end of the day, if the parents aren’t on board, you have no youth.” 6. Love the youth for who they are – “Youth don’t want me to be a young person, they want me to be someone who will listen and have Bible knowledge to help them and encourage them in decision making.”

challenge, with many youth finding workarounds to net filtering programs. This has heightened issues around body image, p eer pressure, gaming addiction and access to pornography. “The problems tend to be around social stuff, expectations, and needing to have the right look, but that existed before with the Dolly magazine,” says Mr Hyslop. “A lot of the gaming consumes hours, and there’s a lot of people who say they can see it’s not helping.”

5 TEENS ARE CURIOUS 3 TEENS ARE FORMING THEIR IDENTITY Teens have always wrestled with who they are. Recently this has been dominated by issues surrounding sexuality, gender and mental health. There is now less taboo surrounding mental wellbeing, with issues, support and therapists spoken about freely. “There were lots of people who weren’t getting the help they needed back then,” says Mr Hyslop. “I wonder if schools are

trying to push resilience because ABOUT THE GOSPEL they’re recognising young people Popular culture and discussions don’t have the tools to stand tall in the public arena have changed in the face of difficult situations.” the type of questions teens are asking of God, but teens are no 4 THE SHIFT IN SCREEN less interested. TIME AMPLIFIES ISSUES “There is a lot about gender The number of screens and that definitely wasn’t there in control of screen time has the nineties,” says Mr Hyslop. shifted from one television “There’s a false position that controlled by a parent to multiple to accept someone, you have screens owned by teens. Setting to agree with them. It’s a boundaries around screen and misunderstanding of tolerance. viewed media has become a That’s a challenge always.”  SC

Sharing the gospel with seafarers