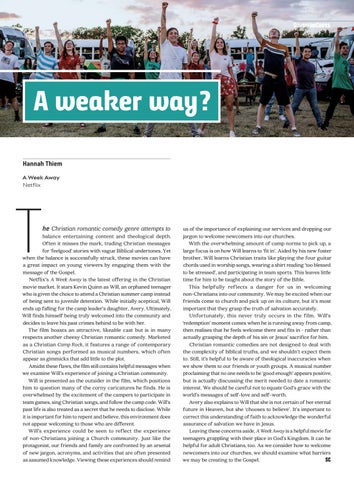 A weaker way ? Hannah Thiem A Week Away Netflix

balance entertaining content and theological depth. Often it misses the mark, trading Christian messages for ‘feelgood’ stories with vague Biblical undertones. Yet when the balance is successfully struck, these movies can have a great impact on young viewers by engaging them with the message of the Gospel. Netflix’s A Week Away is the latest offering in the Christian movie market. It stars Kevin Quinn as Will, an orphaned teenager who is given the choice to attend a Christian summer camp instead of being sent to juvenile detention. While initially sceptical, Will ends up falling for the camp leader’s daughter, Avery. Ultimately, Will finds himself being truly welcomed into the community and decides to leave his past crimes behind to be with her. The film boasts an attractive, likeable cast but is in many respects another cheesy Christian romantic comedy. Marketed as a Christian Camp Rock, it features a range of contemporary Christian songs performed as musical numbers, which often appear as gimmicks that add little to the plot. Amidst these flaws, the film still contains helpful messages when we examine Will’s experience of joining a Christian community. Will is presented as the outsider in the film, which positions him to question many of the corny caricatures he finds. He is overwhelmed by the excitement of the campers to participate in team games, sing Christian songs, and follow the camp code. Will’s past life is also treated as a secret that he needs to disclose. While it is important for him to repent and believe, this environment does not appear welcoming to those who are different. Will’s experience could be seen to reflect the experience of non-Christians joining a Church community. Just like the protagonist, our friends and family are confronted by an arsenal of new jargon, acronyms, and activities that are often presented as assumed knowledge. Viewing these experiences should remind

us of the importance of explaining our services and dropping our jargon to welcome newcomers into our churches. With the overwhelming amount of camp norms to pick up, a large focus is on how Will learns to ‘fit in’. Aided by his new foster brother, Will learns Christian traits like playing the four guitar chords used in worship songs, wearing a shirt reading ‘too blessed to be stressed’, and participating in team sports. This leaves little time for him to be taught about the story of the Bible. This helpfully reflects a danger for us in welcoming non-Christians into our community. We may be excited when our friends come to church and pick up on its culture, but it’s most important that they grasp the truth of salvation accurately. Unfortunately, this never truly occurs in the film. Will’s ‘redemption’ moment comes when he is running away from camp, then realises that he feels welcome there and fits in - rather than actually grasping the depth of his sin or Jesus’ sacrifice for him. Christian romantic comedies are not designed to deal with the complexity of biblical truths, and we shouldn’t expect them to. Still, it’s helpful to be aware of theological inaccuracies when we show them to our friends or youth groups. A musical number proclaiming that no one needs to be ‘good enough’ appears positive, but is actually discussing the merit needed to date a romantic interest. We should be careful not to equate God’s grace with the world’s messages of self-love and self-worth. Avery also explains to Will that she is not certain of her eternal future in Heaven, but she ‘chooses to believe’. It’s important to correct this understanding of faith to acknowledge the wonderful assurance of salvation we have in Jesus. Leaving these concerns aside, A Week Away is a helpful movie for teenagers grappling with their place in God’s Kingdom. It can be helpful for adult Christians, too. As we consider how to welcome newcomers into our churches, we should examine what barriers we may be creating to the Gospel.SC