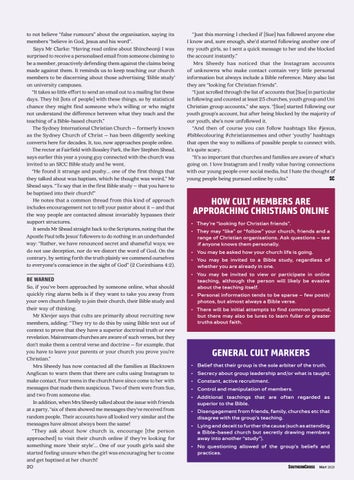 to not believe “false rumours” about the organisation, saying its members “believe in God, Jesus and his word”. Says Mr Clarke: “Having read online about Shincheonji I was surprised to receive a personalised email from someone claiming to be a member, proactively defending them against the claims being made against them. It reminds us to keep teaching our church members to be discerning about those advertising ‘Bible study’ on university campuses. “It takes so little effort to send an email out to a mailing list these days. They hit [lots of people] with these things, so by statistical chance they might find someone who’s willing or who might not understand the difference between what they teach and the teaching of a Bible-based church.” The Sydney International Christian Church – formerly known as the Sydney Church of Christ – has been diligently seeking converts here for decades. It, too, now approaches people online. The rector at Fairfield with Bossley Park, the Rev Stephen Shead, says earlier this year a young guy connected with the church was invited to an SICC Bible study and he went. “He found it strange and pushy... one of the first things that they talked about was baptism, which he thought was weird,” Mr Shead says. “To say that in the first Bible study – that you have to be baptised into their church!” He notes that a common thread from this kind of approach includes encouragement not to tell your pastor about it – and that the way people are contacted almost invariably bypasses their support structures. It sends Mr Shead straight back to the Scriptures, noting that the Apostle Paul tells Jesus’ followers to do nothing in an underhanded way: “Rather, we have renounced secret and shameful ways; we do not use deception, nor do we distort the word of God. On the contrary, by setting forth the truth plainly we commend ourselves to everyone’s conscience in the sight of God” (2 Corinthians 4:2). BE WARNED So, if you’ve been approached by someone online, what should quickly ring alarm bells is if they want to take you away from your own church family to join their church, their Bible study and their way of thinking. Mr Klevjer says that cults are primarily about recruiting new members, adding: “They try to do this by using Bible text out of context to prove that they have a superior doctrinal truth or new revelation. Mainstream churches are aware of such verses, but they don’t make them a central verse and doctrine – for example, that you have to leave your parents or your church you prove you’re Christian.” Mrs Sheedy has now contacted all the families at Blacktown Anglican to warn them that there are cults using Instagram to make contact. Four teens in the church have since come to her with messages that made them suspicious. Two of them were from Sue, and two from someone else. In addition, when Mrs Sheedy talked about the issue with friends at a party, “six of them showed me messages they’ve received from random people. Their accounts have all looked very similar and the messages have almost always been the same! “They ask about how church is, encourage [the person approached] to visit their church online if they’re looking for something more ‘their style’... One of our youth girls said she started feeling unsure when the girl was encouraging her to come and get baptised at her church! 20

“Just this morning I checked if [Sue] has followed anyone else I know and, sure enough, she’d started following another one of my youth girls, so I sent a quick message to her and she blocked the account instantly.” Mrs Sheedy has noticed that the Instagram accounts of unknowns who make contact contain very little personal information but always include a Bible reference. Many also list they are “looking for Christian friends”. “I just scrolled through the list of accounts that [Sue] in particular is following and counted at least 25 churches, youth group and Uni Christian group accounts,” she says. “[Sue] started following our youth group’s account, but after being blocked by the majority of our youth, she’s now unfollowed it. “And then of course you can follow hashtags like #jesus, #biblecolouring #christianmemes and other ‘youthy’ hashtags that open the way to millions of possible people to connect with. It’s quite scary. “It’s so important that churches and families are aware of what’s going on. I love Instagram and I really value having connections with our young people over social media, but I hate the thought of young people being pursued online by cults.”SC

HOW CULT MEMBERS ARE APPROACHING CHRISTIANS ONLINE • They’re “looking for Christian friends”. • They may “like” or “follow” your church, friends and a range of Christian organisations. Ask questions – see if anyone knows them personally. • You may be asked how your church life is going. • You may be invited to a Bible study, regardless of whether you are already in one. • You may be invited to view or participate in online teaching, although the person will likely be evasive about the teaching itself. • Personal information tends to be sparse – few posts/ photos, but almost always a Bible verse. • There will be initial attempts to find common ground, but there may also be lures to learn fuller or greater truths about faith.

GENERAL CULT MARKERS • Belief that their group is the sole arbiter of the truth. • Secrecy about group leadership and/or what is taught. • Constant, active recruitment. • Control and manipulation of members. • Additional teachings that are often regarded as superior to the Bible. • Disengagement from friends, family, churches etc that disagree with the group’s teaching. • Lying and deceit to further the cause (such as attending a Bible-based church but secretly drawing members away into another “study”). • No questioning allowed of the group’s beliefs and practices.