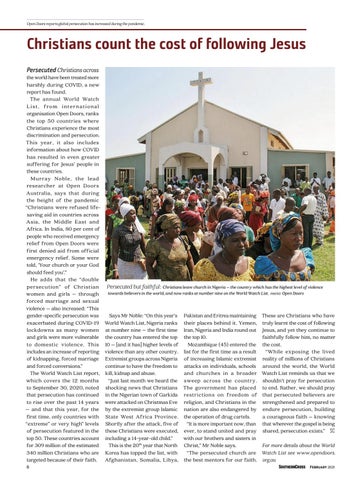 Open Doors reports global persecution has increased during the pandemic.

Christians count the cost of following Jesus Persecuted Christians across the world have been treated more harshly during COVID, a new report has found. The annual World Watch L i s t , f ro m i nte r n at io n al organisation Open Doors, ranks the top 50 countries where Christians experience the most discrimination and persecution. This year, it also includes information about how COVID has resulted in even greater suffering for Jesus’ people in these countries. Murray Noble, the lead researcher at Open Doors Australia, says that during the height of the pandemic “Christians were refused lifesaving aid in countries across Asia, the Middle East and Africa. In India, 80 per cent of people who received emergency relief from Open Doors were first denied aid from official emergency relief. Some were told, ‘Your church or your God should feed you’.” He adds that the “double persecution” of Christian women and girls – through forced marriage and sexual violence – also increased: “This gender-specific persecution was exacerbated during COVID-19 lockdowns as many women and girls were more vulnerable to domestic violence. This includes an increase of reporting of kidnapping, forced marriage and forced conversions.” The World Watch List report, which covers the 12 months to September 30, 2020, noted that persecution has continued to rise over the past 14 years – and that this year, for the first time, only countries with “extreme” or very high” levels of persecution featured in the top 50. These countries account for 309 million of the estimated 340 million Christians who are targeted because of their faith. 6

Persecuted but faithful: Christians leave church in Nigeria – the country which has the highest level of violence towards believers in the world, and now ranks at number nine on the World Watch List.

Says Mr Noble: “On this year’s World Watch List, Nigeria ranks at number nine – the first time the country has entered the top 10 – [and it has] higher levels of violence than any other country. Extremist groups across Nigeria continue to have the freedom to kill, kidnap and abuse. “Just last month we heard the shocking news that Christians in the Nigerian town of Garkida were attacked on Christmas Eve by the extremist group Islamic State West Africa Province. Shortly after the attack, five of these Christians were executed, including a 14-year-old child.” This is the 20th year that North Korea has topped the list, with Afghanistan, Somalia, Libya,

Pakistan and Eritrea maintaining their places behind it. Yemen, Iran, Nigeria and India round out the top 10. Mozambique (45) entered the list for the first time as a result of increasing Islamic extremist attacks on individuals, schools and churches in a broader sweep across the country. The government has placed restrictions on freedom of religion, and Christians in the nation are also endangered by the operation of drug cartels. “It is more important now, than ever, to stand united and pray with our brothers and sisters in Christ,” Mr Noble says. “The persecuted church are the best mentors for our faith.

These are Christians who have truly learnt the cost of following Jesus, and yet they continue to faithfully follow him, no matter the cost. “While exposing the lived reality of millions of Christians around the world, the World Watch List reminds us that we shouldn’t pray for persecution to end. Rather, we should pray that persecuted believers are strengthened and prepared to endure persecution, building a courageous faith – knowing that wherever the gospel is being shared, persecution exists.” SC For more details about the World Watch List see www.opendoors. org.au SouthernCross