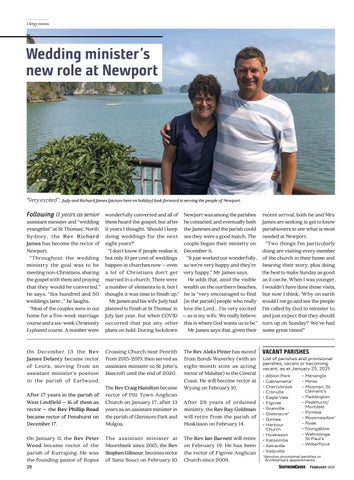 Following 11 years as senior wonderfully converted and all of Newport was among the parishes recent arrival, both he and Mrs assistant minister and “wedding evangelist” at St Thomas’, North Sydney, the Rev Richard James has become the rector of Newport. “Throughout the wedding ministry the goal was to be meeting non-Christians, sharing the gospel with them and praying that they would be converted,” he says. “Six hundred and 50 weddings later…” he laughs. “Most of the couples were in our home for a five-week marriage course and a six-week Christianity Explained course. A number were

them heard the gospel, but after 11 years I thought, ‘Should I keep doing weddings for the next eight years?’ “I don’t know if people realise it, but only 10 per cent of weddings happen in churches now – even a lot of Christians don’t get married in a church. There were a number of elements to it, but I thought it was time to finish up.” Mr James and his wife Judy had planned to finish at St Thomas’ in July last year, but when COVID occurred that put any other plans on hold. During lockdown

Crossing Church near Penrith The Rev Aleks Pinter has moved from 2015-2019, then served as from Bondi-Waverley (with an assistant minister to St John’s, eight-month stint as acting Beecroft until the end of 2020. rector of Malabar) to the Central Coast. He will become rector at The Rev Craig Hamilton became Wyong on February 10. rector of Pitt Town Anglican Church on January 17, after 13 After 28 years of ordained years as an assistant minister in ministry, the Rev Ray Goldman the parish of Glenmore Park and will retire from the parish of Mulgoa. Huskisson on February 14.

On January 11, the Rev Peter Wood became rector of the parish of Kurrajong. He was the founding pastor of Ropes

The assistant minister at The Rev Ian Barnett will retire Moorebank since 2015, the Rev on February 19. He has been Stephen Gilmour, becomes rector the rector of Figtree Anglican of Sans Souci on February 10. Church since 2008.

he contacted, and eventually both the Jameses and the parish could see they were a good match. The couple began their ministry on December 8. “It just worked out wonderfully, so we’re very happy and they’re very happy,” Mr James says. He adds that, amid the visible wealth on the northern beaches, he is “very encouraged to find [in the parish] people who really love the Lord... I’m very excited – as is my wife. We really believe this is where God wants us to be.” Mr James says that, given their

James are seeking to get to know parishioners to see what is most needed at Newport. “Two things I’m particularly doing are visiting every member of the church in their home and hearing their story, plus doing the best to make Sunday as good as it can be. When I was younger, I wouldn’t have done those visits, but now I think, ‘Why on earth would I not go and see the people I’m called by God to minister to, and just expect that they should turn up on Sunday? We’ve had some great times!”