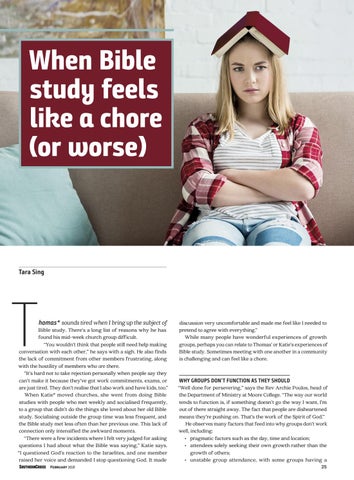 When Bible study feels like a chore (or worse)

homas* sounds tired when I bring up the subject of

Bible study. There’s a long list of reasons why he has found his mid-week church group difficult. “You wouldn’t think that people still need help making conversation with each other,” he says with a sigh. He also finds the lack of commitment from other members frustrating, along with the hostility of members who are there. “It’s hard not to take rejection personally when people say they can’t make it because they’ve got work commitments, exams, or are just tired. They don’t realise that I also work and have kids, too.” When Katie* moved churches, she went from doing Bible studies with people who met weekly and socialised frequently, to a group that didn’t do the things she loved about her old Bible study. Socialising outside the group time was less frequent, and the Bible study met less often than her previous one. This lack of connection only intensified the awkward moments. “There were a few incidents where I felt very judged for asking questions I had about what the Bible was saying,” Katie says. “I questioned God’s reaction to the Israelites, and one member raised her voice and demanded I stop questioning God. It made SouthernCross

discussion very uncomfortable and made me feel like I needed to pretend to agree with everything.” While many people have wonderful experiences of growth groups, perhaps you can relate to Thomas’ or Katie’s experiences of Bible study. Sometimes meeting with one another in a community is challenging and can feel like a chore.

WHY GROUPS DON’T FUNCTION AS THEY SHOULD “Well done for persevering,” says the Rev Archie Poulos, head of the Department of Ministry at Moore College. “The way our world tends to function is, if something doesn’t go the way I want, I’m out of there straight away. The fact that people are disheartened means they’re pushing on. That’s the work of the Spirit of God.” He observes many factors that feed into why groups don’t work well, including: • pragmatic factors such as the day, time and location; • attendees solely seeking their own growth rather than the growth of others; • unstable group attendance, with some groups having a 25