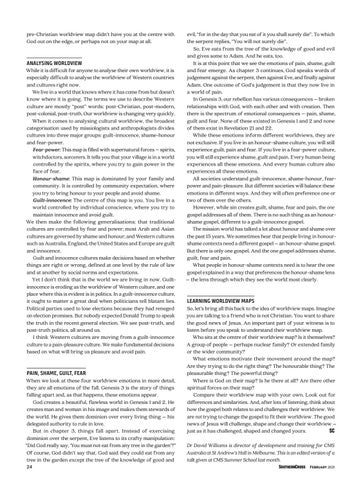 pre-Christian worldview map didn’t have you at the centre with God out on the edge, or perhaps not on your map at all.

ANALYSING WORLDVIEW While it is difficult for anyone to analyse their own worldview, it is especially difficult to analyse the worldview of Western countries and cultures right now. We live in a world that knows where it has come from but doesn’t know where it is going. The terms we use to describe Western culture are mostly “post” words: post-Christian, post-modern, post-colonial, post-truth. Our worldview is changing very quickly. When it comes to analysing cultural worldview, the broadest categorisation used by missiologists and anthropologists divides cultures into three major groups: guilt-innocence, shame-honour and fear-power. Fear-power: This map is filled with supernatural forces – spirits, witchdoctors, sorcerers. It tells you that your village is in a world controlled by the spirits, where you try to gain power in the face of fear. Honour-shame: This map is dominated by your family and community. It is controlled by community expectation, where you try to bring honour to your people and avoid shame. Guilt-innocence: The centre of this map is you. You live in a world controlled by individual conscience, where you try to maintain innocence and avoid guilt. We then make the following generalisations: that traditional cultures are controlled by fear and power; most Arab and Asian cultures are governed by shame and honour; and Western cultures such as Australia, England, the United States and Europe are guilt and innocence. Guilt and innocence cultures make decisions based on whether things are right or wrong, defined at one level by the rule of law and at another by social norms and expectations. Yet I don’t think that is the world we are living in now. Guiltinnocence is eroding as the worldview of Western culture, and one place where this is evident is in politics. In a guilt-innocence culture, it ought to matter a great deal when politicians tell blatant lies. Political parties used to lose elections because they had reneged on election promises. But nobody expected Donald Trump to speak the truth in the recent general election. We see post-truth, and post-truth politics, all around us. I think Western cultures are moving from a guilt-innocence culture to a pain-pleasure culture. We make fundamental decisions based on what will bring us pleasure and avoid pain.

PAIN, SHAME, GUILT, FEAR When we look at these four worldview emotions in more detail, they are all emotions of the fall. Genesis 3 is the story of things falling apart and, as that happens, these emotions appear. God creates a beautiful, flawless world in Genesis 1 and 2. He creates man and woman in his image and makes them stewards of the world. He gives them dominion over every living thing – his delegated authority to rule in love. But in chapter 3, things fall apart. Instead of exercising dominion over the serpent, Eve listens to its crafty manipulation: “Did God really say, ‘You must not eat from any tree in the garden’?” Of course, God didn’t say that. God said they could eat from any tree in the garden except the tree of the knowledge of good and 24

evil, “for in the day that you eat of it you shall surely die”. To which the serpent replies, “You will not surely die”. So, Eve eats from the tree of the knowledge of good and evil and gives some to Adam. And he eats, too. It is at this point that we see the emotions of pain, shame, guilt and fear emerge. As chapter 3 continues, God speaks words of judgement against the serpent, then against Eve, and finally against Adam. One outcome of God’s judgement is that they now live in a world of pain. In Genesis 3, our rebellion has various consequences – broken relationships with God, with each other and with creation. Then there is the spectrum of emotional consequences – pain, shame, guilt and fear. None of these existed in Genesis 1 and 2 and none of them exist in Revelation 21 and 22. While these emotions inform different worldviews, they are not exclusive. If you live in an honour-shame culture, you will still experience guilt, pain and fear. If you live in a fear-power culture, you will still experience shame, guilt and pain. Every human being experiences all these emotions. And every human culture also experiences all these emotions. All societies understand guilt-innocence, shame-honour, fearpower and pain-pleasure. But different societies will balance these emotions in different ways. And they will often preference one or two of them over the others. However, while sin creates guilt, shame, fear and pain, the one gospel addresses all of them. There is no such thing as an honourshame gospel, different to a guilt-innocence gospel. The mission world has talked a lot about honour and shame over the past 15 years. We sometimes hear that people living in honourshame contexts need a different gospel – an honour-shame gospel. But there is only one gospel. And the one gospel addresses shame, guilt, fear and pain. What people in honour-shame contexts need is to hear the one gospel explained in a way that preferences the honour-shame lens – the lens through which they see the world most clearly.

LEARNING WORLDVIEW MAPS So, let’s bring all this back to the idea of worldview maps. Imagine you are talking to a friend who is not Christian. You want to share the good news of Jesus. An important part of your witness is to listen before you speak to understand their worldview map. Who sits at the centre of their worldview map? Is it themselves? A group of people – perhaps nuclear family? Or extended family or the wider community? What emotions motivate their movement around the map? Are they trying to do the right thing? The honourable thing? The pleasurable thing? The powerful thing? Where is God on their map? Is he there at all? Are there other spiritual forces on their map? Compare their worldview map with your own. Look out for differences and similarities. And, after lots of listening, think about how the gospel both relates to and challenges their worldview. We are not trying to change the gospel to fit their worldview. The good news of Jesus will challenge, shape and change their worldview – just as it has challenged, shaped and changed yours.  SC Dr David Williams is director of development and training for CMS Australia at St Andrew’s Hall in Melbourne. This is an edited version of a talk given at CMS Summer School last month. SouthernCross