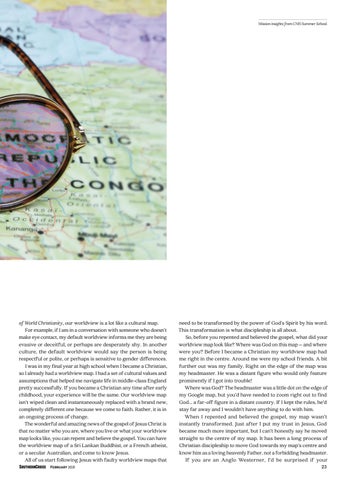 of World Christianity, our worldview is a lot like a cultural map. For example, if I am in a conversation with someone who doesn’t make eye contact, my default worldview informs me they are being evasive or deceitful, or perhaps are desperately shy. In another culture, the default worldview would say the person is being respectful or polite, or perhaps is sensitive to gender differences. I was in my final year at high school when I became a Christian, so I already had a worldview map. I had a set of cultural values and assumptions that helped me navigate life in middle-class England pretty successfully. If you became a Christian any time after early childhood, your experience will be the same. Our worldview map isn’t wiped clean and instantaneously replaced with a brand new, completely different one because we come to faith. Rather, it is in an ongoing process of change. The wonderful and amazing news of the gospel of Jesus Christ is that no matter who you are, where you live or what your worldview map looks like, you can repent and believe the gospel. You can have the worldview map of a Sri Lankan Buddhist, or a French atheist, or a secular Australian, and come to know Jesus. All of us start following Jesus with faulty worldview maps that SouthernCross

need to be transformed by the power of God’s Spirit by his word. This transformation is what discipleship is all about. So, before you repented and believed the gospel, what did your worldview map look like? Where was God on this map – and where were you? Before I became a Christian my worldview map had me right in the centre. Around me were my school friends. A bit further out was my family. Right on the edge of the map was my headmaster. He was a distant figure who would only feature prominently if I got into trouble! Where was God? The headmaster was a little dot on the edge of my Google map, but you’d have needed to zoom right out to find God... a far-off figure in a distant country. If I kept the rules, he’d stay far away and I wouldn’t have anything to do with him. When I repented and believed the gospel, my map wasn’t instantly transformed. Just after I put my trust in Jesus, God became much more important, but I can’t honestly say he moved straight to the centre of my map. It has been a long process of Christian discipleship to move God towards my map’s centre and know him as a loving heavenly Father, not a forbidding headmaster. If you are an Anglo Westerner, I’d be surprised if your 23