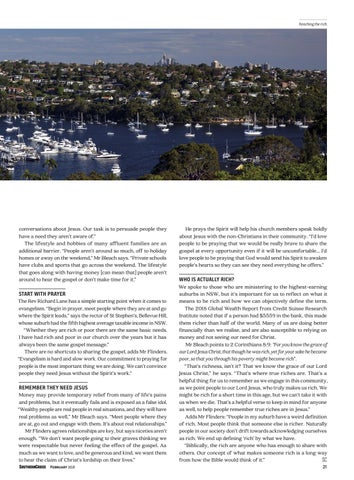 conversations about Jesus. Our task is to persuade people they have a need they aren’t aware of.” The lifestyle and hobbies of many affluent families are an additional barrier. “People aren’t around so much, off to holiday homes or away on the weekend,” Mr Bleach says. “Private schools have clubs and sports that go across the weekend. The lifestyle that goes along with having money [can mean that] people aren’t around to hear the gospel or don’t make time for it.” START WITH PRAYER The Rev Richard Lane has a simple starting point when it comes to evangelism. “Begin in prayer, meet people where they are at and go where the Spirit leads,” says the rector of St Stephen’s, Bellevue Hill, whose suburb had the fifth highest average taxable income in NSW. “Whether they are rich or poor there are the same basic needs. I have had rich and poor in our church over the years but it has always been the same gospel message.” There are no shortcuts to sharing the gospel, adds Mr Flinders. “Evangelism is hard and slow work. Our commitment to praying for people is the most important thing we are doing. We can’t convince people they need Jesus without the Spirit’s work.” REMEMBER THEY NEED JESUS Money may provide temporary relief from many of life’s pains and problems, but it eventually fails and is exposed as a false idol. “Wealthy people are real people in real situations, and they will have real problems as well,” Mr Bleach says. “Meet people where they are at, go out and engage with them. It’s about real relationships.” Mr Flinders agrees relationships are key, but says niceties aren’t enough. “We don’t want people going to their graves thinking we were respectable but never feeling the effect of the gospel. As much as we want to love, and be generous and kind, we want them to hear the claim of Christ’s lordship on their lives.” SouthernCross

He prays the Spirit will help his church members speak boldly about Jesus with the non-Christians in their community. “I’d love people to be praying that we would be really brave to share the gospel at every opportunity even if it will be uncomfortable... I’d love people to be praying that God would send his Spirit to awaken people’s hearts so they can see they need everything he offers.” WHO IS ACTUALLY RICH? We spoke to those who are ministering to the highest-earning suburbs in NSW, but it’s important for us to reflect on what it means to be rich and how we can objectively define the term. The 2018 Global Wealth Report from Credit Suisse Research Institute noted that if a person had $5559 in the bank, this made them richer than half of the world. Many of us are doing better financially than we realise, and are also susceptible to relying on money and not seeing our need for Christ. Mr Bleach points to 2 Corinthians 8:9: “For you know the grace of our Lord Jesus Christ, that though he was rich, yet for your sake he became poor, so that you through his poverty might become rich”. “That’s richness, isn’t it? That we know the grace of our Lord Jesus Christ,” he says. “That’s where true riches are. That’s a helpful thing for us to remember as we engage in this community, as we point people to our Lord Jesus, who truly makes us rich. We might be rich for a short time in this age, but we can’t take it with us when we die. That’s a helpful verse to keep in mind for anyone as well, to help people remember true riches are in Jesus.” Adds Mr Flinders: “People in my suburb have a weird definition of rich. Most people think that someone else is richer. Naturally people in our society don’t drift towards acknowledging ourselves as rich. We end up defining ‘rich’ by what we have. “Biblically, the rich are anyone who has enough to share with others. Our concept of what makes someone rich is a long way from how the Bible would think of it.” SC 21