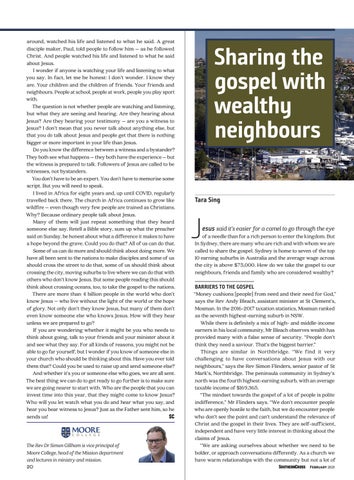 around, watched his life and listened to what he said. A great disciple maker, Paul, told people to follow him – as he followed Christ. And people watched his life and listened to what he said about Jesus. I wonder if anyone is watching your life and listening to what you say. In fact, let me be honest: I don’t wonder. I know they are. Your children and the children of friends. Your friends and neighbours. People at school, people at work, people you play sport with. The question is not whether people are watching and listening, but what they are seeing and hearing. Are they hearing about Jesus? Are they hearing your testimony – are you a witness to Jesus? I don’t mean that you never talk about anything else, but that you do talk about Jesus and people get that there is nothing bigger or more important in your life than Jesus. Do you know the difference between a witness and a bystander? They both see what happens – they both have the experience – but the witness is prepared to talk. Followers of Jesus are called to be witnesses, not bystanders. You don’t have to be an expert. You don’t have to memorise some script. But you will need to speak. I lived in Africa for eight years and, up until COVID, regularly travelled back there. The church in Africa continues to grow like wildfire – even though very few people are trained as Christians. Why? Because ordinary people talk about Jesus. Many of them will just repeat something that they heard someone else say. Retell a Bible story, sum up what the preacher said on Sunday, be honest about what a difference it makes to have a hope beyond the grave. Could you do that? All of us can do that. Some of us can do more and should think about doing more. We have all been sent to the nations to make disciples and some of us should cross the street to do that, some of us should think about crossing the city, moving suburbs to live where we can do that with others who don’t know Jesus. But some people reading this should think about crossing oceans, too, to take the gospel to the nations. There are more than 4 billion people in the world who don’t know Jesus – who live without the light of the world or the hope of glory. Not only don’t they know Jesus, but many of them don’t even know someone else who knows Jesus. How will they hear unless we are prepared to go? If you are wondering whether it might be you who needs to think about going, talk to your friends and your minister about it and see what they say. For all kinds of reasons, you might not be able to go far yourself, but I wonder if you know of someone else in your church who should be thinking about this. Have you ever told them that? Could you be used to raise up and send someone else? And whether it’s you or someone else who goes, we are all sent. The best thing we can do to get ready to go further is to make sure we are going nearer to start with. Who are the people that you can invest time into this year, that they might come to know Jesus? Who will you let watch what you do and hear what you say, and hear you bear witness to Jesus? Just as the Father sent him, so he sends us!SC

The Rev Dr Simon Gillham is vice principal of Moore College, head of the Mission department and lectures in ministry and mission. 20

of a needle than for a rich person to enter the kingdom. But In Sydney, there are many who are rich and with whom we are called to share the gospel. Sydney is home to seven of the top 10 earning suburbs in Australia and the average wage across the city is above $75,000. How do we take the gospel to our neighbours, friends and family who are considered wealthy?

BARRIERS TO THE GOSPEL “Money cushions [people] from need and their need for God,” says the Rev Andy Bleach, assistant minister at St Clement’s, Mosman. In the 2016-2017 taxation statistics, Mosman ranked as the seventh highest-earning suburb in NSW. While there is definitely a mix of high- and middle-income earners in his local community, Mr Bleach observes wealth has provided many with a false sense of security. “People don’t think they need a saviour. That’s the biggest barrier.” Things are similar in Northbridge. “We find it very challenging to have conversations about Jesus with our neighbours,” says the Rev Simon Flinders, senior pastor of St Mark’s, Northbridge. The peninsula community in Sydney’s north was the fourth highest-earning suburb, with an average taxable income of $169,365. “The mindset towards the gospel of a lot of people is polite indifference,” Mr Flinders says. “We don’t encounter people who are openly hostile to the faith, but we do encounter people who don’t see the point and can’t understand the relevance of Christ and the gospel in their lives. They are self-sufficient, independent and have very little interest in thinking about the claims of Jesus. “We are asking ourselves about whether we need to be bolder, or approach conversations differently. As a church we have warm relationships with the community but not a lot of SouthernCross