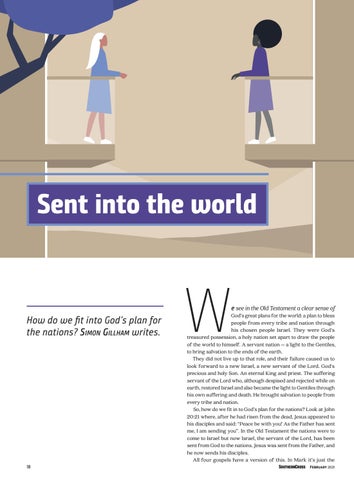 Sent into the world

How do we fit into God’s plan for the nations? Simon Gillham writes.

e see in the Old Testament a clear sense of

God’s great plans for the world: a plan to bless people from every tribe and nation through his chosen people Israel. They were God’s treasured possession, a holy nation set apart to draw the people of the world to himself. A servant nation – a light to the Gentiles, to bring salvation to the ends of the earth. They did not live up to that role, and their failure caused us to look forward to a new Israel, a new servant of the Lord. God’s precious and holy Son. An eternal King and priest. The suffering servant of the Lord who, although despised and rejected while on earth, restored Israel and also became the light to Gentiles through his own suffering and death. He brought salvation to people from every tribe and nation. So, how do we fit in to God’s plan for the nations? Look at John 20:21 where, after he had risen from the dead, Jesus appeared to his disciples and said: “Peace be with you! As the Father has sent me, I am sending you”. In the Old Testament the nations were to come to Israel but now Israel, the servant of the Lord, has been sent from God to the nations. Jesus was sent from the Father, and he now sends his disciples. All four gospels have a version of this. In Mark it’s just the SouthernCross