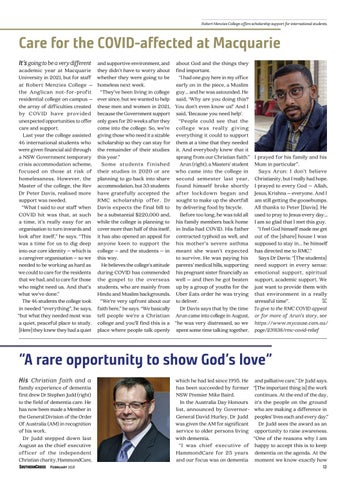 Care for the COVID-affected at Macquarie It’s going to be a very different and supportive environment, and about God and the things they academic year at Macquarie University in 2021, but for staff at Robert Menzies College – the Anglican not-for-profit residential college on campus – the array of difficulties created by COVID have provided unexpected opportunities to offer care and support. Last year the college assisted 46 international students who were given financial aid through a NSW Government temporary crisis accommodation scheme, focused on those at risk of homelessness. However, the Master of the college, the Rev Dr Peter Davis, realised more support was needed. “What I said to our staff when COVID hit was that, at such a time, it’s really easy for an organisation to turn inwards and look after itself,” he says. “This was a time for us to dig deep into our core identity – which is a caregiver organisation – so we needed to be working as hard as we could to care for the residents that we had, and to care for those who might need us. And that’s what we’ve done.” The 46 students the college took in needed “everything”, he says, “but what they needed most was a quiet, peaceful place to study. [Here] they knew they had a quiet

they didn’t have to worry about whether they were going to be homeless next week. “They’ve been living in college ever since, but we wanted to help these men and women in 2021, because the Government support only goes for 20 weeks after they come into the college. So, we’re giving those who need it a sizable scholarship so they can stay for the remainder of their studies this year.” Some students finished their studies in 2020 or are planning to go back into share accommodation, but 33 students have gratefully accepted the RMC scholarship offer. Dr Davis expects the final bill to be a substantial $220,000 and, while the college is planning to cover more than half of this itself, it has also opened an appeal for anyone keen to support the college – and the students – in this way. He believes the college’s attitude during COVID has commended the gospel to the overseas students, who are mainly from Hindu and Muslim backgrounds. “We’re very upfront about our faith here,” he says. “We basically tell people we’re a Christian college and you’ll find this is a place where people talk openly

find important. “I had one guy here in my office early on in the piece, a Muslim guy... and he was astounded. He said, ‘Why are you doing this? You don’t even know us!’ And I said, ‘Because you need help’. “People could see that the college was really giving everything it could to support them at a time that they needed it. And everybody knew that it sprang from our Christian faith.” Arun (right), a Masters’ student who came into the college in second semester last year, found himself broke shortly after lockdown began and sought to make up the shortfall by delivering food by bicycle. Before too long, he was told all his family members back home in India had COVID. His father contracted typhoid as well, and his mother’s severe asthma meant she wasn’t expected to survive. He was paying his parents’ medical bills, supporting his pregnant sister financially as well – and then he got beaten up by a group of youths for the Uber Eats order he was trying to deliver. Dr Davis says that by the time Arun came into college in August, “he was very distressed, so we spent some time talking together,

I prayed for his family and his Mum in particular”. Says Arun: I don’t believe Christianity, but I really had hope. I prayed to every God – Allah, Jesus, Krishna – everyone. And I am still getting the goosebumps. All thanks to Peter [Davis]. He used to pray to Jesus every day... I am so glad that I met this guy. “I feel God himself made me get out of the [share] house I was supposed to stay in... he himself has directed me to RMC.” Says Dr Davis: “[The students] need support in every sense: emotional support, spiritual support, academic support. We just want to provide them with that environment in a really stressful time”.SC To give to the RMC COVID appeal or for more of Arun’s story, see https://www.mycause.com.au/ page/239138/rmc-covid-relief

“A rare opportunity to show God’s love” His Christian faith and a family experience of dementia first drew Dr Stephen Judd (right) to the field of dementia care. He has now been made a Member in the General Division of the Order Of Australia (AM) in recognition of his work. Dr Judd stepped down last August as the chief executive officer of the independent Christian charity, HammondCare, SouthernCross

which he had led since 1995. He has been succeeded by former NSW Premier Mike Baird. In the Australia Day Honours list, announced by GovernorGeneral David Hurley, Dr Judd was given the AM for significant service to older persons living with dementia. “I was chief executive of HammondCare for 25 years and our focus was on dementia

and palliative care,” Dr Judd says. “[The important thing is] the work continues. At the end of the day, it’s the people on the ground who are making a difference in peoples’ lives each and every day.” Dr Judd sees the award as an opportunity to raise awareness. “One of the reasons why I am happy to accept this is to keep dementia on the agenda. At the moment we know exactly how 13