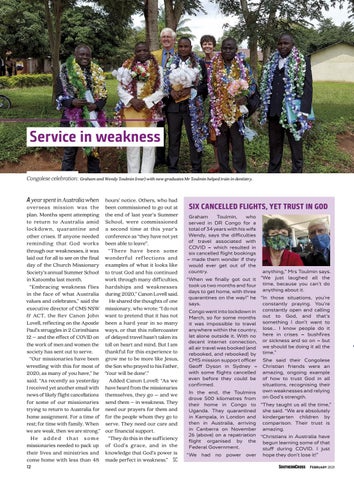 A year spent in Australia when hours’ notice. Others, who had overseas mission was the plan. Months spent attempting to return to Australia amid lockdown, quarantine and other crises. If anyone needed reminding that God works through our weaknesses, it was laid out for all to see on the final day of the Church Missionary Society’s annual Summer School in Katoomba last month. “Embracing weakness flies in the face of what Australia values and celebrates,” said the executive director of CMS NSW & ACT, the Rev Canon John Lovell, reflecting on the Apostle Paul’s struggles in 2 Corinthians 12 – and the effect of COVID on the work of men and women the society has sent out to serve. “Our missionaries have been wrestling with this for most of 2020, as many of you have,” he said. “As recently as yesterday I received yet another email with news of likely flight cancellations for some of our missionaries trying to return to Australia for home assignment. For a time of rest; for time with family. When we are weak, then we are strong.” He added that some missionaries needed to pack up their lives and ministries and come home with less than 48 12

been commissioned to go out at the end of last year’s Summer School, were commissioned a second time at this year’s conference as “they have not yet been able to leave”. “There have been some wonderful reflections and examples of what it looks like to trust God and his continued work through many difficulties, hardships and weaknesses during 2020,” Canon Lovell said. He shared the thoughts of one missionary, who wrote: “I do not want to pretend that it has not been a hard year in so many ways, or that this rollercoaster of delayed travel hasn’t taken its toll on heart and mind. But I am thankful for this experience to grow me to be more like Jesus, the Son who prayed to his Father, ‘Your will be done’.” Added Canon Lovell: “As we have heard from the missionaries themselves, they go – and we send them – in weakness. They need our prayers for them and for the people whom they go to serve. They need our care and our financial support. “They do this in the sufficiency of God’s grace, and in the knowledge that God’s power is made perfect in weakness.”SC

SIX CANCELLED FLIGHTS, YET TRUST IN GOD Graham Toulmin, who served in DR Congo for a total of 34 years with his wife Wendy, says the difficulties of travel associated with COVID – which resulted in six cancelled flight bookings – made them wonder if they would ever get out of the country. “When we finally got out it took us two months and four days to get home, with three quarantines on the way!” he says.

anything,” Mrs Toulmin says. “We just laughed all the time, because you can’t do anything about it.

“In those situations, you’re constantly praying. You’re Congo went into lockdown in constantly open and calling March, so for some months out to God, and that’s it was impossible to travel something I don’t want to anywhere within the country, lose... I know people do it here in crises – bushfires let alone outside it. With no decent internet connection, or sickness and so on – but we should be doing it all the all air travel was booked (and time.” rebooked, and rebooked) by CMS mission support officer She said their Congolese Geoff Dyson in Sydney – Christian friends were an with some flights cancelled amazing, ongoing example even before they could be of how to trust God in all confirmed. situations, recognising their In the end, the Toulmins own weaknesses and relying drove 500 kilometres from on God’s strength.

their home in Congo to Uganda. They quarantined in Kampala, in London and then in Australia, arriving in Canberra on November 26 (above) on a repatriation flight organised by the Federal Government. “We

“They taught us all the time,” she said. “We are absolutely kindergarten children by comparison. Their trust is amazing. “Christians in Australia have begun learning some of that stuff during COVID. I just hope they don’t lose it!”