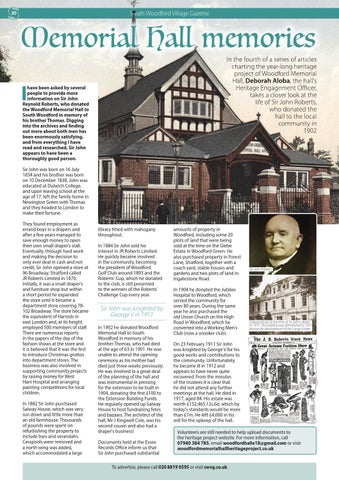 have been asked by several people to provide more information on Sir John Reynold Roberts, who donated the Woodford Memorial Hall to South Woodford in memory of his brother Thomas. Digging into the archives and finding out more about both men has been enormously satisfying, and from everything I have read and researched, Sir John appears to have been a thoroughly good person. Sir John was born on 16 July 1834 and his brother was born on 10 December 1838. John was educated at Dulwich College, and upon leaving school at the age of 17, left the family home in Newington Green with Thomas and they headed to London to make their fortune. They found employment as errand boys in a drapers and after a few years managed to save enough money to open their own small draper's stall. Eventually, through hard work and making the decision to only ever deal in cash and not credit, Sir John opened a store at 96 Broadway, Stratford called JR Roberts Limited in 1870. Initially, it was a small draper's and furniture shop but within a short period he expanded the store until it became a department store covering 78102 Broadway. The store became the equivalent of Harrods in east London and, at its height, employed 500 members of staff. There are numerous reports in the papers of the day of the fashion shows at the store and it is believed that it was the first to introduce Christmas grottos into department stores. The business was also involved in supporting community projects by raising money for West Ham Hospital and arranging painting competitions for local children. In 1882 Sir John purchased Salway House, which was very run down and little more than an old farmhouse. Thousands of pounds were spent on refurbishing the property to include bars and verandahs. Cesspools were removed and a north wing was added, which accommodated a large

library fitted with mahogany throughout. In 1884 Sir John sold his interest in JR Roberts Limited. He quickly became involved in the community, becoming the president of Woodford Golf Club around 1893 and the Roberts' Cup, which he donated to the club, is still presented to the winners of the Roberts' Challenge Cup every year.

Sir John was knighted by George V in 1911 In 1902 he donated Woodford Memorial Hall to South Woodford in memory of his brother Thomas, who had died at the age of 63 in 1901. He was unable to attend the opening ceremony as his mother had died just three weeks previously. He was involved in a great deal of the planning of the hall and was instrumental in pressing for the extension to be built in 1904, donating the first £100 to the Extension Building Funds. He regularly opened up Salway House to host fundraising fetes and bazaars. The architect of the hall, Mr J Kingwell Cole, was his second cousin and also had a draper's business! Documents held at the Essex Records Office inform us that Sir John purchased substantial

amounts of property in Woodford, including some 20 plots of land that were being sold at the time on the Glebe Estate in Woodford Green. He also purchased property in Forest Lane, Stratford, together with a coach yard, stable houses and gardens and two plots of land in Ingatestone Road. In 1904 he donated the Jubilee Hospital to Woodford, which served the community for over 80 years. During the same year he also purchased the old Union Church on the High Road in Woodford, which he converted into a Working Men's Club (now a snooker club). On 23 February 1911 Sir John was knighted by George V for his good works and contributions to the community. Unfortunately, he became ill in 1912 and appears to have never quite recovered. From the minutes of the trustees it is clear that he did not attend any further meetings at the hall. He died in 1917, aged 84. His estate was worth £152,465.12s.6d, which by today's standards would be more than £7m. He left £4,000 in his will for the upkeep of the hall.

Salway House at the time of Sir John's death in 1917. The building was demolished in 1931 during the development of the Laings Estate 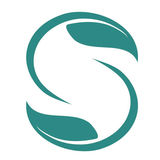