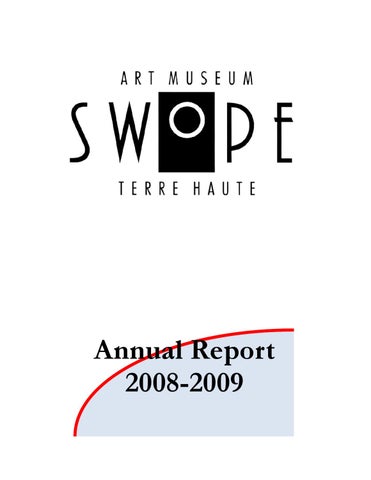 This annual report marks my first full year at the Swope Art Museumâ&amp;#x20AC;&amp;#x201D;and what a year it has been! We have hosted wonderful exhibitions and programs that have been enjoyed by our community. So many of you worked to throw party after exciting party, making it difficult to keep track of each fun moment. I have also made many wonderful friends this year and it is heartwarming to hear so many people speak about how important the Swope and its mission is to Terre Haute and the Wabash Valley. Thanks are due to each of you who support the Museum through your contributions of time, finances, ideas and creativity. Without you, this institution could not continue to serve the community of Terre Haute and the people of the Wabash Valley. Thanks are also due to the dedicated staff of the Swope who work daily to make this space an exciting and welcoming destination for our guests. As we look back at the past year and the exhibitions, programs and fundraisers that brought excitement and awareness to our beloved Museum, we must also look to the future and the continued challenge to bring attention to this amazing collection of American paintings and sculpture. Whether Board member or docent, Alliance member or volunteer, we appreciate all that you do for this institution and look forward to seeing you in the galleries.

This prestigious juried exhibition attracted Wabash Valley artists within a 150-mile radius of Terre Haute and is perhaps the most important way the Museum honors its commitment to local and regional artists. David Edgar, professor of art and director, MA of the Arts Administration Program, University of North Carolina at Charlotte was the juror. Sponsored by First Financial Bank. Umbria from the Eye of Al Pounders

Al Pounders, From the Gritti Vineyards, 2006, oil on canvas

For the past twenty years, Al Pounders has spent half of each year painting in the rugged Umbrian terrain of Italy and the other half at his home in West Lafayette Indiana where he is professor emeritus of painting at Purdue University. Pounders’ Italian landscapes are grand panoramic vistas, encompassing Italy’s rich history, which is ripe with myths and miracles, in vast swaths of paint. His painting style, though realistic, is not bound by a photorealistic dedication to document. Instead, he seeks to interpret the essence of his experience. These landscapes dramatize the rolling hills and patch-worked fields of the rugged Umbrian terrain. The mood in Pounders’ paintings and drawings reflect the artists respect, infatuation and awe of Italy which he calls, ―the country of miracles.‖ This exhibit at the Swope featured large scale paintings that the artist had not shown before. Sponsored by Old National Bancorp

This exhibition highlighted selected images from an ongoing project by Terre Haute photographer Bill Elmore. Though Elmore works as a studio and commercial photographer, he is not new to adrenaline pumping situations. He spent four years in Vietnam as a navy photographer and one of the photographs from that experience was featured on the cover of a 1975 Time Magazine. For this series, Elmore spent several years following and documenting local emergency responders as they carried out their harrowing jobs; a harrowing job in itself. These striking and dramatic images were evidence of the photographer’s admiration of the dedicated and courageous individuals who fight fires, chase criminals and respond to accidents in the Terre Haute community. Sponsored by Baesler’s Market and C.H. Garmong and Son, Inc.

African American Images and Artists from the Swope Collection January 13 through March 21, 2009

The Swope collection, rich in diversity, was highlighted by an exhibition of the images by or about African Americans. From an impressionist seascape by Indiana’s own William Edouard Scott, through the 1960’s organic abstract sculpture of Chicago native Richard Hunt, to the turn of this century’s social commentary of Cincinnati’s Thomas Shaw--the work of African American artists in the Swope collection covers a wide range of artistic perspectives. Other artists who have addressed African American subject matter are the Southern American Regionalists John McCrady, New York’s Raphael Soyer, and Champaign-Urbana’s Billy Morrow Jackson. Many other artists were represented in this exhibition presented in conjunction with the national celebration of Black History Month.

Works from Perception: recent paintings of the Midwest Paint Group February 6 through March 14, 2009

This traveling exhibition appeared first at the Swope before continuing on to the Albrecht-Kemper Museum in St. Joseph, Missouri and The George A. Spiva Center for the Arts in Joplin, Missouri. The ten members of the Midwest Paint Group share a commitment to Post Abstract Figuration. Though the ten hail mainly from Missouri, Ohio, and Illinois, some come from as far as Maine and Canada and include Terre Haute’s resident Mike Neary. These artists bring new life to old and favorite genres such as landscape, figure and still life painting by assimilating historical precedents with a contemporary point of view. They attempt to find contemporary ways to express the three dimensional world on the two dimensional surface. Because of its strong regional collection, the Swope was particularly suited to host this exhibition of Midwest artists and was proud to support the ongoing artistic endeavors of artists who remain committed to working in and depicting the region. A color catalogue accompanied the exhibition. Sponsored by Terre Haute Regional Hospital.

This annual exhibition proudly showcased the work of students from local and regional school art programs. The Student Art Exhibition began in the mid 1960’s in cooperation with the Vigo County School System. Since then the show has evolved and expanded to include some private schools, home school associations and high schools from other counties in Indiana, with invitations extended to schools in Illinois as well. The 2009 exhibition featured work from kindergarten through high school and included 248 artworks from 256 students representing 38 schools and teachers. At the High School level (9th – 12th grades) the art works are juried for exhibit and judged for awards by a non- partisan juror. Sponsored by Old National Bancorp. 5

Friday, October 3 First Friday: Memory and Memorials An opportunity to visit the Museum’s galleries after hours, in addition to complimentary hors d’oeuvres and a cash bar while sharing in a tribute to New Orleans. Swope Book Club: Do You Know What it Means to Miss New Orleans? Edited by David Rutledge. Ricardo Hutchins’ Renew Orleans, discussed and gave a pictorial tour of the devastation and redevelopment of New Orleans after Hurricane Katrina and showed how he uses it as inspiration for the classroom and his artwork. Wednesday, October 8 Brown Bag Lunch &amp; Learn ―Abstract Art is Destroying America,‖ a talk on the question, problems and challenge of abstract art by Brian Lee Whisenhunt, executive director of the Swope.

Friday, October 17 Alliance of the Swope Art Museum meeting Guest speaker: John Lustig; W.P.A. Era Holiday Greeting Cards. Friday, October 17 Champagne Toast Patron level members enjoy a special Prosecco toast in honor of the Al Pounders Italian landscapes prior to the opening, plus a sneak peak of the exhibitions. Upgrade your membership to the Patron level today to receive a special invitation to this event. Public Opening Reception for the exhibitions: Umbria from the eye of Al Pounders and Terre Haute Heroes Project: photographs by Bill Elmore November 2008

Friday, December 5 First Friday: Italian Holiday Enjoy a special opportunity to visit the Museum’s galleries during Downtown Terre Haute’s annual Holiday Fest. Visitors can enjoy complimentary hors d’oeuvres and a cash bar, plus create a holiday ornament inspired by the work of Al Pounders. Swope Book Club: The Lost Painting: The Quest for a Caravaggio Masterpiece by Jonathan Harr. Al Pounders, whose paintings are featured in Umbria from the eye of Al Pounders, will talk about painting in Italy. January 2009

Friday, February 20 Alliance of the Swope speaker series Sala Wong &amp; Peter Williams: Sense of Place Wong and Williams spoke about their video installation on view at Halcyon Gallery during the month of February. Ms. Wong is currently assistant professor of digital art at Indiana State University. Mr. Williams is assistant professor of new media art at DePauw University. Saturday, February 21 Mardi Gras at the Swope! While it was cold outside, it was a warm and festive evening at the Swope in a celebration of Mardi Gras complete with masks, Southern food, incredible drinks and music all night long. March 2009

Friday, March 6 First Friday: Southern Hospitality Swope Book Club: Call of the Wild by Jack London, presented in conjunction with the Vigo County Public Library’s Big Read Free screenings of McCrady’s Southern Scene, a 1992 documentary on the life and times of John McCrady, one of the south’s most prominent regionalist painters. Produced by Matthew J. Martinez in association with WYES and Choupique Productions of New Orleans with grant support from the Louisiana Endowment for the Humanities. 8

Wednesday, March 11 Brown Bag Lunch &amp; Learn Paula Katz, gallery director at Herron School of Art and Design, IUPUI, Indianapolis and juror for the 42nd Annual School Show will spoke about her work as a curator. Friday, March 20 Alliance of the Swope speaker series Rick Baldomero: Photography Past &amp; Present Rick presented a short history of photography and discussion of his own work. Rick owns and operates ―Baldomero Photography and Graphics‖ in Marshall, Illinois and teaches photography at Ivy Tech. April 2009

Friday, April 3 First Friday: Art Talk Swope Book Club: Portraits: Talking with Artists at the Met, the Modern, the Louvre and Elsewhere by Michael Kimmelman, art critic for the New York Times Presentation by local artist Mike Tingley, discussed the sculptural process of assemblage. Saturday, April 4 I’D RATHER BE IN THE STUDIO! A No-Excuses Art Marketing Workshop An all-day workshop lead by Alyson Stanfield of Artbiz.com and author of the book, I’d Rather be in the Studio! The Artist’s No-Excuse Guide to Self-Promotion. Attended by artists from Illinois, Indiana, Kentucky and Tennessee. Wednesday, April 8 Brown Bag Lunch &amp; Learn Kathy Gotshal, director of the Graduate Art Therapy program at Saint Mary-of-the-Woods College, discussed the program and application of art therapy. Friday, April 17 Alliance of the Swope speaker series Mary Kramer: ―Lines in the Earth‖ by Mary Kramer, who discussed her latest body of work including the title piece and the Border Series as well as the works of photographer Simon Peterson. Saturday, April 18 42nd Annual School Show public reception and award ceremony. Lisa Petrulis, Swope Board Member Barbara Vogel and Brian Whisenhunt are shown presenting awards.

Friday, May 1 First Friday: Spring Fling Swope Book Club: Strapless: John Singer Sargent and the Fall of Madame X by Deborah Davis Sunday, May 3 Spring Dinner and Silent Auction at the Terre Haute Country Club An annual tradition with wonderful food, exciting art and the best auction items the community has to offer, all to benefit the Swope Art Museum. Wednesday, May 13 42nd Annual School Show Recognition Luncheon Friday, May 15 Alliance of the Swope speaker series Melissa Vandenberg: Soft Power: A Project Based Practice Melissa will discussed her exhibition â&amp;#x20AC;&amp;#x2022;Soft Powerâ&amp;#x20AC;&amp;#x2013; which explores the relationship between art, ancestry, nationalism and politics through commonplace materials and objects. Melissa was the director of the ISU Art Gallery and is a sculptor and installation artist. Summer Youth Art Program Eight weeks of summer art fun for the children of Terre Haute.

Loren Olson, Al Pounders, David Zaun, Harriet McNeal and Brian Whisenhunt at the Italian Dinner given in conjunction with the exhibition Umbria from the Eye of Al Pounders.

The Swope’s Annual Dinner and Silent Auction at the Country Club of Terre Haute. A fun and successful evening!

In the spring of 2009, over fifteen-hundred students from Vigo County School Corporation visited the Swope Art Museum and had tours given by the Museumâ&amp;#x20AC;&amp;#x2122;s docents.

Over one thousand volunteer hours donated on work for fundraisers, events and programs at the Swope! 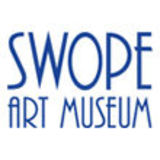