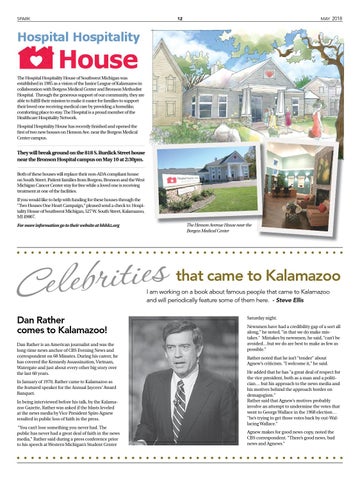 The Hospital Hospitality House of Southwest Michigan was established in 1985 as a vision of the Junior League of Kalamazoo in collaboration with Borgess Medical Center and Bronson Methodist Hospital. Through the generous support of our community, they are able to fulfill their mission to make it easier for families to support their loved one receiving medical care by providing a homelike, comforting place to stay. The Hospital is a proud member of the Healthcare Hospitality Network. Hospital Hospitality House has recently finished and opened the first of two new houses on Henson Ave. near the Borgess Medical Center campus.

For more information go to their website at hhhkz.org

that came to Kalamazoo

I am working on a book about famous people that came to Kalamazoo and will periodically feature some of them here. - Steve Ellis

Dan Rather comes to Kalamazoo! Dan Rather is an American journalist and was the long-time news anchor of CBS Evening News and correspondent on 60 Minutes. During his career, he has covered the Kennedy Assassination, Vietnam, Watergate and just about every other big story over the last 60 years. In January of 1970, Rather came to Kalamazoo as the featured speaker for the Annual Jaycees’ Award Banquet. In being interviewed before his talk, by the Kalamazoo Gazette, Rather was asked if the blasts leveled at the news media by Vice President Spiro Agnew resulted in public loss of faith in the press. “You can’t lose something you never had. The public has never had a great deal of faith in the news media,” Rather said during a press conference prior to his speech at Western Michigan’s Student Center

Saturday night. Newsmen have had a credibility gap of a sort all along,” he noted, “in that we do make mistakes.” Mistakes by newsmen, he said, “can’t be avoided…but we do are best to make as few as possible.” Rather noted that he isn’t “tender” about Agnew’s criticism. “I welcome it,” he said. He added that he has “a great deal of respect for the vice president, both as a man and a politician… but his approach to the news media and his motives behind the approach border on demagogism.” Rather said that Agnew’s motives probably involve an attempt to undermine the votes that went to George Wallace in the 1968 election… ”he’s trying to get those votes back by out-Wallacing Wallace.” Agnew makes for good news copy, noted the CBS correspondent. “There’s good news, bad news and Agnews.” 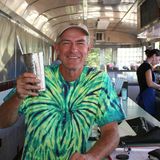