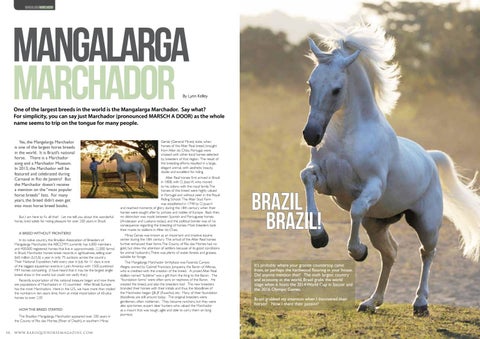 One of the largest breeds in the world is the Mangalarga Marchador. Say what? For simplicity, you can say just Marchador (pronounced MARSCH A DOOR) as the whole name seems to trip on the tongue for many people. Yes, the Mangalarga Marchador is one of the largest horse breeds in the world. It is Brazil’s national horse. There is a Marchador song and a Marchador Museum. In 2013, the Marchador will be featured and celebrated during Carnaval in Rio de Janeiro! But the Marchador doesn’t receive a mention on the “most popular horse breeds” lists. For many years, the breed didn’t even get into most horse breed books. But, I am here to fix all that! Let me tell you about this wonderful horse, bred solely for riding pleasure for over 200 years in Brazil. A breed without frontiers! In its native country, the Brazilian Association of Breeders of Mangalarga Marchador, the ABCCMM, currently has 6,000 members and 400,000 registered horses that live in approximately 22,000 farms! In Brazil, Marchador horses break records in agribusiness, selling over $60 million (U.S.$) a year in only 75 auctions across the country. Their National Exposition, held every year in July for 11 days, is one of the biggest equestrian events in Latin America with 1500 purebred MM horses competing. (I have heard that it may be the largest single breed show in the world, but could not verify that.) Recently, exportation of this national treasure began and now there are populations of Marchadors in 15 countries! After Brasil, Europe has the most Marchadors. Here in the U.S., we have more than tripled the numbers in ten years time, from an initial importation of 60-plus horses to over 220! How the breed started The Brazilian Mangalarga Marchador appeared over 200 years in the County of Rio das Mortes (River of Death), in southern Minas

Gerais (General Mines) state, when horses of the Alter Real breed, brought from Alter do Chão, Portugal, were crossed with other local horses selected by breeders of that region.  The result of the breeding efforts resulted in a large, elegant animal, with aesthetic beauty, docile and excellent for riding. Alter Real horses first arrived in Brazil in 1808, with D. Joao VI, who moved to his colony with the royal family. The horses of this breed were highly valued in Portugal and without peer in the Royal Riding School. The Alter Stud Farm was established in 1748 by D. Joao V and reached moments of glory during the 18th century when their horses were sought after by princes and nobles of Europe. Back then, no distinction was made between Spanish and Portuguese horses (Andalusian and Lusitano today), and the political border was of no consequence regarding the breeding of horses. Most breeders took their mares to stallions in Alter do Chao. Minas Gerais was known as an important and creative equine center during the 18th century. The arrival of the Alter Real horses further enhanced their farms. The County of Rio das Mortes had no gold, but drew the attention of settlers because of its good conditions for animal husbandry. There was plenty of water, forests and grasses, suitable for forage. The Mangalarga Marchador birthplace was Fazenda Campo Alegre, owned by Gabriel Francisco Junqueira, the Baron of Alfenas, who is credited with the creation of the breed. A prized Alter Real stallion named “Sublime” was a gift from the King to the Baron. The “foundation farms” were often sons or nephews of the Baron. He created the breed, and also the breeders too! The new breeders branded their horses with their initials and thus, the bloodlines of the Marchador began (JB, JF (Favacho) etc. Many of their foundation bloodlines are still around today. The original breeders were gentlemen, often noblemen. They became ranchers, but they were also sportsmen, expert deer hunters who valued the Marchador as a mount that was tough, agile and able to carry them on long journeys.

Brazil Brazil! It’s probably where your granite countertop came from, or perhaps the hardwood flooring in your house. Did anyone mention that? The sixth largest country and economy in the world, Brazil grabs the world stage when it hosts the 2014 World Cup in Soccer and the 2016 Olympic Games. Brazil grabbed my attention when I discovered their horses! Now I share their passion!

Mangalarga Marchador How did they get their name? There are several versions for the name Mangalarga Marchador. The most widely told one is related to Fazenda Mangalarga, located in Pati do Alferes, Rio de Janeiro. The name of the farm was the same as a mountain range that existed in the region. The owner was a wealthy landowner who, impressed with the horses of the Junqueira family, bought some horses and showed them off in the elegant promenades held in Rio de Janeiro. People began to refer to these horses as the ones like the horses from Fazenda Mangalarga. They asked for “Mangalarga” horses. Marchador was added to indicate the horses that had a marcha instead of a trot. Built in Quality The Brazilian breeders are passionate about breeding. Each generation improves toward their ideal. The Marchador is a working breed - versatile and able to perform for the task-at-hand. Because of their discipline in breeding, the horses are consistently impressive. In Brazil, all Marchador horses must undergo an inspection by the ABCCMM breed judges to be approved for permanent registration and breeding, a process similar to PRE Andalusian horses and European warmbloods. Foals are inspected before weaning for disqualification (genetic defects). Then at age three, when the horse is trained under saddle, the horses are inspected for conformation, gait and temperament. Approved horses are branded with the trademarked Horseshoe M brand of the ABCCMM. Only approved horses are allowed to breed. Here in the U.S., I have continued this tradition at my farm, Summerwind. In 2005, 2008 and 2010, I organized the ABCCMM inspection visits for U.S.-born Marchador horses for my farm and other breeders. This was the first time Marchador inspections were performed outside of Brazil! Because of the long tradition of the Brazilian breeders and the inspection process, the Marchador has solid conformation, a lot of

bone and good feet, with wonderful intelligence and a calm, willing temperament. The Marchador horse is easy to train, gentle and kind. Small children in Brazil commonly ride them because of its easygoing nature and smooth gaits. Breed Description The Mangalarga Marchador averages 15 hands and weigh between 850 and 1100 pounds. Gray is prominent, but chestnuts, blacks, bays, buckskins, palominos and pinto horses may also be found. They are a medium-sized, well-proportioned horse built to be strong and agile. They have a vigorous and healthy appearance with smooth skin, silky hair and shining eyes – a regal appearance! Marchadors are known for their good feet. The temperament is docile, easily trained smooth and very gentle. A sure-footed horse with plenty of cow sense as well as stamina, this breed holds the Guinness book of World Records Endurance Ride of 8,694 miles in 1994.

Gaits The Mangalarga Marchador is a versatile working horse breed that is also gaited. It has two special gaits – the “marcha picada” and ‘marcha batida”. Both are four beat gaits and provide moments of triple hoof support. Personal preference and riding terrain determine which one is “better”. Generally, the marcha picada is considered smoother, with more time spent in lateral pairs. The marcha batida is often considered more athletic and less tiring to the horse. It is a unique gait with more time spent in diagonal pairs. The Marchador has a wonderful canter, which

The footfall sequence is

About Lynn Kelley Lynn Kelley was an early adopter and importer of the Mangalarga Marchador here in the U.S. finding the breed in 2001. She is the current ABCCMM liaison to the U.S.. Lynn was one of the four

founding members of the US Mangalarga Marchador Association, dedicated to promoting the Marchador here, serving as President and Registrar in the past. She and husband John are retired and the Marchador horses are their passion. Lynn is a bloodline fanatic and always has been. (Before the Marchadors, it was TBs and Arabians). To improve the diversity and ensure the quality of the Marchador breed is guaranteed, John and Lynn are creating a frozen semen and embryo bank of ELITE and CHAMPION Marchador horses from top breeders in Brazil. They offer frozen semen, frozen embryos and reservations for foals through SW Future Foal in AZ, CO and NC. a Find Lynn at SW Future Foal @ Summerwind http://futurefoal.net

Reserve a Future Foal of your design Mangalarga Marchador Introduction to the Breed

Magazine article about the Marchador breed.

Mangalarga Marchador Introduction to the Breed

Magazine article about the Marchador breed.