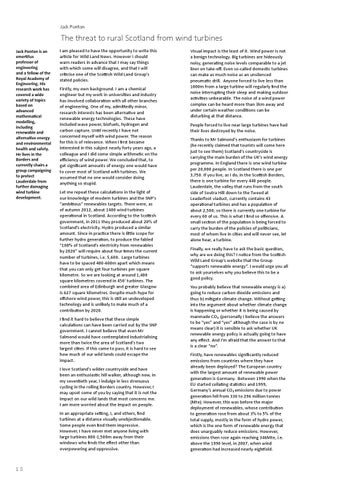 The threat to rural Scotland from wind turbines Jack Ponton is an emertitus professor of engineering and a fellow of the Royal Academy of Engineering. His research work has covered a wide variety of topics based on advanced mathematical modelling, including renewable and alternative energy and environmental health and safety. He lives in the Borders and currently chairs a group campaigning to protect Lauderdale from further damaging wind turbine development.

I am pleased to have the opportunity to write this article for Wild Land News. However I should warn readers in advance that I may say things with which some will disagree, and that I will criticise one of the Scottish Wild Land Group's stated policies. Firstly, my own background. I am a chemical engineer but my work in universities and industry has involved collaboration with all other branches of engineering. One of my, admittedly minor, research interests has been alternative and renewable energy technologies. These have included wave power, biofuels, hydrogen and carbon capture. Until recently I have not concerned myself with wind power. The reason for this is of relevance. When I first became interested in this subject nearly forty years ago, a colleague and I did some simple arithmetic on the efficiency of wind power. We concluded that, to get significant amounts of energy one would have to cover most of Scotland with turbines. We assumed that no one would consider doing anything so stupid. Let me repeat these calculations in the light of our knowledge of modern turbines and the SNP's “ambitious” renewables targets. There were, as of autumn 2012, about 1400 wind turbines operational in Scotland. According to the Scottish government, in 2011 they produced about 20% of Scotland’s electricity. Hydro produced a similar amount. Since in practice there is little scope for further hydro generation, to produce the fabled “100% of Scotland’s electricity from renewables by 2020” will require about four times the current number of turbines, i.e. 5,600. Large turbines have to be spaced 400-600m apart which means that you can only get four turbines per square kilometre. So we are looking at around 1,400 square kilometres covered in 450' turbines. The combined area of Edinburgh and greater Glasgow is 627 square kilometres. Despite much hype for offshore wind power, this is still an undeveloped technology and is unlikely to make much of a contribution by 2020. I find it hard to believe that these simple calculations can have been carried out by the SNP government. I cannot believe that even Mr Salmond would have contemplated industrialising more than twice the area of Scotland's two largest cities. If this came to pass, it is hard to see how much of our wild lands could escape the impact. I love Scotland's wilder countryside and have been an enthusiastic hill walker, although now, in my seventieth year, I indulge in less strenuous cycling in the rolling Borders country. However, I may upset some of you by saying that it is not the impact on our wild lands that most concerns me. I am more worried about the impact on people. In an appropriate setting, I, and others, find turbines at a distance visually unobjectionable. Some people even find them impressive. However, I have never met anyone living with large turbines 800-1,500m away from their windows who finds the effect other than overpowering and oppressive.

Visual impact is the least of it. Wind power is not a benign technology. Big turbines are hideously noisy, generating noise levels comparable to a jet liner on take-off. Even so-called domestic turbines can make as much noise as an unsilenced pneumatic drill. Anyone forced to live less than 1000m from a large turbine will regularly find the noise interrupting their sleep and making outdoor activities unbearable. The noise of a wind power complex can be heard more than 3km away and under certain weather conditions can be disturbing at that distance. People forced to live near large turbines have had their lives destroyed by the noise. Thanks to Mr Salmond's enthusiasm for turbines (he recently claimed that tourists will come here just to see them) Scotland's countryside is carrying the main burden of the UK's wind energy programme. In England there is one wind turbine per 20,000 people. In Scotland there is one per 3,750. If you live, as I do, in the Scottish Borders, there is one turbine for every 440 people. Lauderdale, the valley that runs from the south side of Soutra Hill down to the Tweed at Leaderfoot viaduct, currently contains 43 operational turbines and has a population of about 2,500, so there is currently one turbine for every 60 of us. This is what I find so offensive. A small section of the population is being forced to carry the burden of the policies of politicians, most of whom live in cities and will never see, let alone hear, a turbine. Finally, we really have to ask the basic question, why are we doing this? I notice from the Scottish Wild Land Group’s website that the Group “supports renewable energy”. I would urge you all to ask yourselves why you believe this to be a good policy. You probably believe that renewable energy is a) going to reduce carbon dioxide emissions and thus b) mitigate climate change. Without getting into the argument about whether climate change is happening or whether it is being caused by manmade CO2 (personally I believe the answers to be “yes” and “yes” although the case is by no means clear) it is sensible to ask whether UK renewable energy policy is actually going to have any effect. And I'm afraid that the answer to that is a clear “no”. Firstly, have renewables significantly reduced emissions from countries where they have already been deployed? The European country with the largest amount of renewable power generation is Germany. Between 1990 when the EU started collating statistics and 1999, Germany’s annual CO2 emissions due to power generation fell from 336 to 296 million tonnes (Mte). However, this was before the major deployment of renewables, whose contribution to generation rose from about 3% to 5% of the total supply, mostly in the form of hydro power, which is the one form of renewable energy that does unarguably reduce emissions. However, emissions then rose again reaching 346Mte, i.e. above the 1990 level, in 2007, when wind generation had increased nearly eightfold. 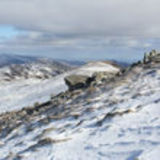