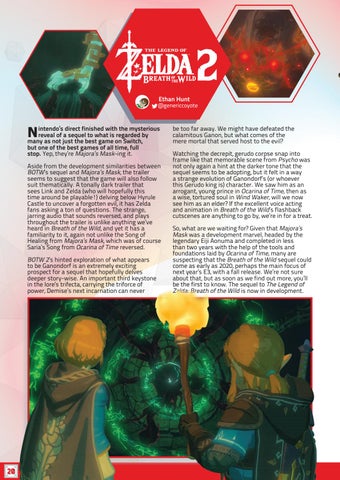 intendo’s direct finished with the mysterious N reveal of a sequel to what is regarded by many as not just the best game on Switch, but one of the best games of all time, full stop. Yep, they’re Majora’s Mask-ing it.

Aside from the development similarities between BOTW’s sequel and Majora’s Mask, the trailer seems to suggest that the game will also follow suit thematically. A tonally dark trailer that sees Link and Zelda (who will hopefully this time around be playable!) delving below Hyrule Castle to uncover a forgotten evil, it has Zelda fans asking a ton of questions. The strange, jarring audio that sounds reversed, and plays throughout the trailer is unlike anything we’ve heard in Breath of the Wild, and yet it has a familiarity to it, again not unlike the Song of Healing from Majora’s Mask, which was of course Saria’s Song from Ocarina of Time reversed.

BOTW 2’s hinted exploration of what appears to be Ganondorf is an extremely exciting prospect for a sequel that hopefully delves deeper story-wise. An important third keystone in the lore’s trifecta, carrying the triforce of power, Demise’s next incarnation can never

be too far away. We might have defeated the calamitous Ganon, but what comes of the mere mortal that served host to the evil? Watching the decrepit, gerudo corpse snap into frame like that memorable scene from Psycho was not only again a hint at the darker tone that the sequel seems to be adopting, but it felt in a way a strange evolution of Ganondorf’s (or whoever this Gerudo king is) character. We saw him as an arrogant, young prince in Ocarina of Time, then as a wise, tortured soul in Wind Waker, will we now see him as an elder? If the excellent voice acting and animation in Breath of the Wild’s flashback cutscenes are anything to go by, we’re in for a treat. So, what are we waiting for? Given that Majora’s Mask was a development marvel, headed by the legendary Eiji Aonuma and completed in less than two years with the help of the tools and foundations laid by Ocarina of Time, many are suspecting that the Breath of the Wild sequel could come as early as 2020, perhaps the main focus of next year’s E3, with a fall release. We’re not sure about that, but as soon as we find out more, you’ll be the first to know. The sequel to The Legend of Zelda: Breath of the Wild is now in development. 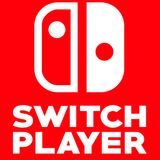