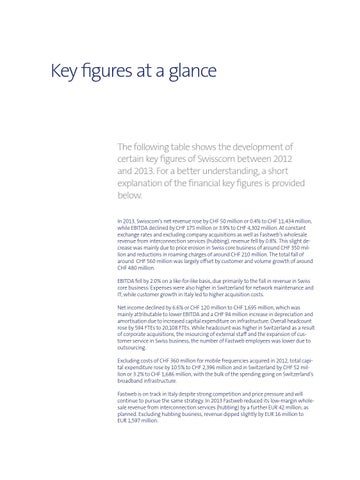 Key figures at a glance

The following table shows the development of certain key figures of Swisscom between 2012 and 2013. For a better understanding, a short explanation of the financial key figures is provided below. In 2013, Swisscom’s net revenue rose by CHF 50 million or 0.4% to CHF 11,434 million, while EBITDA declined by CHF 175 million or 3.9% to CHF 4,302 million. At constant exchange rates and excluding company acquisitions as well as Fastweb’s wholesale revenue from interconnection services (hubbing), revenue fell by 0.8%. This slight decrease was mainly due to price erosion in Swiss core business of around CHF 350 million and reductions in roaming charges of around CHF 210 million. The total fall of around CHF 560 million was largely offset by customer and volume growth of around CHF 480 million. EBITDA fell by 2.0% on a like-for-like basis, due primarily to the fall in revenue in Swiss core business. Expenses were also higher in Switzerland for network maintenance and IT, while customer growth in Italy led to higher acquisition costs. Net income declined by 6.6% or CHF 120 million to CHF 1,695 million, which was mainly attributable to lower EBITDA and a CHF 94 million increase in depreciation and amortisation due to increased capital expenditure on infrastructure. Overall headcount rose by 594 FTEs to 20,108 FTEs. While headcount was higher in Switzerland as a result of corporate acquisitions, the insourcing of external staff and the expansion of customer service in Swiss business, the number of Fastweb employees was lower due to outsourcing. Excluding costs of CHF 360 million for mobile frequencies acquired in 2012, total capital expenditure rose by 10.5% to CHF 2,396 million and in Switzerland by CHF 52 million or 3.2% to CHF 1,686 million, with the bulk of the spending going on Switzerland’s broadband infrastructure. Fastweb is on track in Italy despite strong competition and price pressure and will continue to pursue the same strategy. In 2013 Fastweb reduced its low-margin wholesale revenue from interconnection services (hubbing) by a further EUR 42 million, as planned. Excluding hubbing business, revenue dipped slightly by EUR 16 million to EUR 1,597 million.

As a trustworthy companion in a digital world, we not only provide a good network and good products and services, but also support Swiss people in handling these new media.