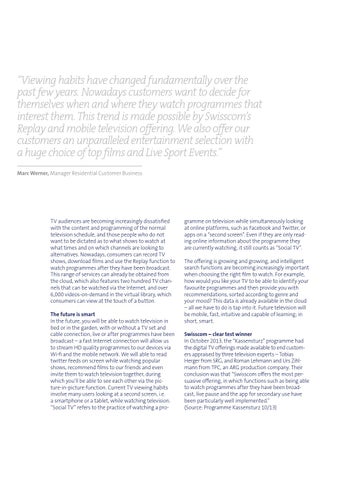 “Viewing habits have changed fundamentally over the past few years. Nowadays customers want to decide for themselves when and where they watch programmes that interest them. This trend is made possible by Swisscom’s Replay and mobile television offering. We also offer our customers an unparalleled entertainment selection with a huge choice of top films and Live Sport Events.” Marc Werner, Manager Residential Customer Business

TV audiences are becoming increasingly dissatisfied with the content and programming of the normal television schedule, and those people who do not want to be dictated as to what shows to watch at what times and on which channels are looking to alternatives. Nowadays, consumers can record TV shows, download films and use the Replay function to watch programmes after they have been broadcast. This range of services can already be obtained from the cloud, which also features two hundred TV channels that can be watched via the Internet, and over 6,000 videos-on-demand in the virtual library, which consumers can view at the touch of a button. The future is smart In the future, you will be able to watch television in bed or in the garden, with or without a TV set and cable connection, live or after programmes have been broadcast – a fast Internet connection will allow us to stream HD quality programmes to our devices via Wi-fi and the mobile network. We will able to read twitter feeds on screen while watching popular shows, recommend films to our friends and even invite them to watch television together, during which you’ll be able to see each other via the picture-in-picture function. Current TV viewing habits involve many users looking at a second screen, i.e. a smartphone or a tablet, while watching television. “Social TV” refers to the practice of watching a pro-

gramme on television while simultaneously looking at online platforms, such as Facebook and Twitter, or apps on a “second screen”. Even if they are only reading online information about the programme they are currently watching, it still counts as “Social TV”. The offering is growing and growing, and intelligent search functions are becoming increasingly important when choosing the right film to watch. For example, how would you like your TV to be able to identify your favourite programmes and then provide you with recommendations, sorted according to genre and your mood? This data is already available in the cloud – all we have to do is tap into it. Future television will be mobile, fast, intuitive and capable of learning; in short, smart. Swisscom – clear test winner In October 2013, the “Kassensturz” programme had the digital TV offerings made available to end customers appraised by three television experts – Tobias Herger from SRG, and Roman Lehmann and Urs Zihlmann from TPC, an ARG production company. Their conclusion was that “Swisscom offers the most persuasive offering, in which functions such as being able to watch programmes after they have been broadcast, live pause and the app for secondary use have been particularly well implemented.” (Source: Programme Kassensturz 10/13)

As a trustworthy companion in a digital world, we not only provide a good network and good products and services, but also support Swiss people in handling these new media.