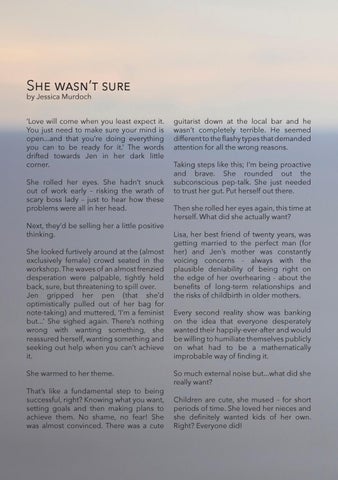 She wasn’t sure by Jessica Murdoch

‘Love will come when you least expect it. You just need to make sure your mind is open...and that you’re doing everything you can to be ready for it.’ The words drifted towards Jen in her dark little corner. She rolled her eyes. She hadn’t snuck out of work early – risking the wrath of scary boss lady – just to hear how these problems were all in her head. Next, they’d be selling her a little positive thinking. She looked furtively around at the (almost exclusively female) crowd seated in the workshop. The waves of an almost frenzied desperation were palpable, tightly held back, sure, but threatening to spill over. Jen gripped her pen (that she’d optimistically pulled out of her bag for note-taking) and muttered, ‘I’m a feminist but...’ She sighed again. There’s nothing wrong with wanting something, she reassured herself, wanting something and seeking out help when you can’t achieve it. She warmed to her theme. That’s like a fundamental step to being successful, right? Knowing what you want, setting goals and then making plans to achieve them. No shame, no fear! She was almost convinced. There was a cute

guitarist down at the local bar and he wasn’t completely terrible. He seemed different to the flashy types that demanded attention for all the wrong reasons. Taking steps like this; I’m being proactive and brave. She rounded out the subconscious pep-talk. She just needed to trust her gut. Put herself out there. Then she rolled her eyes again, this time at herself. What did she actually want? Lisa, her best friend of twenty years, was getting married to the perfect man (for her) and Jen’s mother was constantly voicing concerns - always with the plausible deniability of being right on the edge of her overhearing - about the benefits of long-term relationships and the risks of childbirth in older mothers. Every second reality show was banking on the idea that everyone desperately wanted their happily-ever-after and would be willing to humiliate themselves publicly on what had to be a mathematically improbable way of finding it. So much external noise but...what did she really want? Children are cute, she mused – for short periods of time. She loved her nieces and she definitely wanted kids of her own. Right? Everyone did! 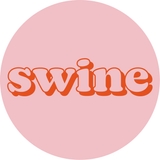