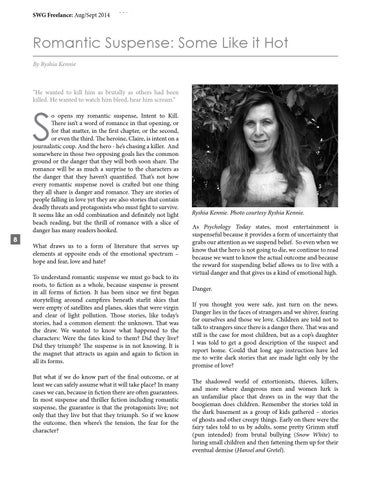 Romantic Suspense: Some Like it Hot By Ryshia Kennie

“He wanted to kill him as brutally as others had been killed. He wanted to watch him bleed, hear him scream.”

o opens my romantic suspense, Intent to Kill. There isn’t a word of romance in that opening, or for that matter, in the first chapter, or the second, or even the third. The heroine, Claire, is intent on a journalistic coup. And the hero - he’s chasing a killer. And somewhere in those two opposing goals lies the common ground or the danger that they will both soon share. The romance will be as much a surprise to the characters as the danger that they haven’t quantified. That’s not how every romantic suspense novel is crafted but one thing they all share is danger and romance. They are stories of people falling in love yet they are also stories that contain deadly threats and protagonists who must fight to survive. It seems like an odd combination and definitely not light beach reading, but the thrill of romance with a slice of danger has many readers hooked. What draws us to a form of literature that serves up elements at opposite ends of the emotional spectrum – hope and fear, love and hate? To understand romantic suspense we must go back to its roots, to fiction as a whole, because suspense is present in all forms of fiction. It has been since we first began storytelling around campfires beneath starlit skies that were empty of satellites and planes, skies that were virgin and clear of light pollution. Those stories, like today’s stories, had a common element: the unknown. That was the draw. We wanted to know what happened to the characters: Were the fates kind to them? Did they live? Did they triumph? The suspense is in not knowing. It is the magnet that attracts us again and again to fiction in all its forms. But what if we do know part of the final outcome, or at least we can safely assume what it will take place? In many cases we can, because in fiction there are often guarantees. In most suspense and thriller fiction including romantic suspense, the guarantee is that the protagonists live; not only that they live but that they triumph. So if we know the outcome, then where’s the tension, the fear for the character?

Ryshia Kennie. Photo courtesy Ryshia Kennie. As Psychology Today states, most entertainment is suspenseful because it provides a form of uncertainty that grabs our attention as we suspend belief. So even when we know that the hero is not going to die, we continue to read because we want to know the actual outcome and because the reward for suspending belief allows us to live with a virtual danger and that gives us a kind of emotional high. Danger. If you thought you were safe, just turn on the news. Danger lies in the faces of strangers and we shiver, fearing for ourselves and those we love. Children are told not to talk to strangers since there is a danger there. That was and still is the case for most children, but as a cop’s daughter I was told to get a good description of the suspect and report home. Could that long ago instruction have led me to write dark stories that are made light only by the promise of love? The shadowed world of extortionists, thieves, killers, and more where dangerous men and women lurk is an unfamiliar place that draws us in the way that the boogieman does children. Remember the stories told in the dark basement as a group of kids gathered – stories of ghosts and other creepy things. Early on there were the fairy tales told to us by adults, some pretty Grimm stuff (pun intended) from brutal bullying (Snow White) to luring small children and then fattening them up for their eventual demise (Hansel and Gretel). 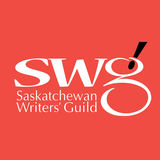