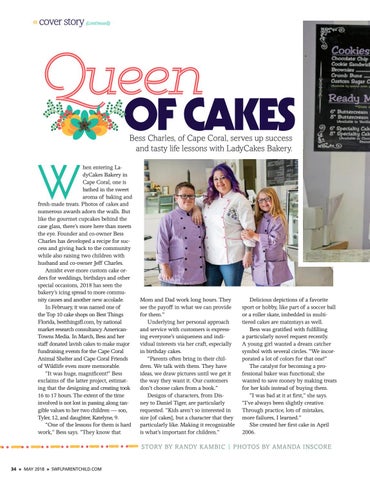 hen entering LadyCakes Bakery in Cape Coral, one is bathed in the sweet aroma of baking and fresh-made treats. Photos of cakes and numerous awards adorn the walls. But like the gourmet cupcakes behind the case glass, there’s more here than meets the eye. Founder and co-owner Bess Charles has developed a recipe for success and giving back to the community while also raising two children with husband and co-owner Jeff Charles. Amidst ever-more custom cake orders for weddings, birthdays and other special occasions, 2018 has seen the bakery’s icing spread to more community causes and another new accolade. In February, it was named one of the Top 10 cake shops on Best Things Florida, bestthingsfl.com, by national market research consultancy AmericanTowns Media. In March, Bess and her staff donated lavish cakes to make major fundraising events for the Cape Coral Animal Shelter and Cape Coral Friends of Wildlife even more memorable. “It was huge, magnificent!” Bess exclaims of the latter project, estimating that the designing and creating took 16 to 17 hours. The extent of the time involved is not lost in passing along tangible values to her two children — son, Tyler, 12, and daughter, Katelyne, 9. “One of the lessons for them is hard work,” Bess says. “They know that

Mom and Dad work long hours. They see the payoff in what we can provide for them.” Underlying her personal approach and service with customers is expressing everyone’s uniqueness and individual interests via her craft, especially in birthday cakes. “Parents often bring in their children. We talk with them. They have ideas, we draw pictures until we get it the way they want it. Our customers don’t choose cakes from a book.” Designs of characters, from Disney to Daniel Tiger, are particularly requested. “Kids aren’t so interested in size [of cakes], but a character that they particularly like. Making it recognizable is what’s important for children.”

Delicious depictions of a favorite sport or hobby, like part of a soccer ball or a roller skate, imbedded in multitiered cakes are mainstays as well. Bess was gratified with fulfilling a particularly novel request recently. A young girl wanted a dream catcher symbol with several circles. “We incorporated a lot of colors for that one!” The catalyst for becoming a professional baker was functional; she wanted to save money by making treats for her kids instead of buying them. “I was bad at it at first,” she says. “I’ve always been slightly creative. Through practice, lots of mistakes, more failures, I learned.” She created her first cake in April 2006. 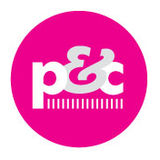 Southwest Florida Parent & Child is a monthly magazine for parents in Lee and Collier counties.

Southwest Florida Parent & Child is a monthly magazine for parents in Lee and Collier counties.