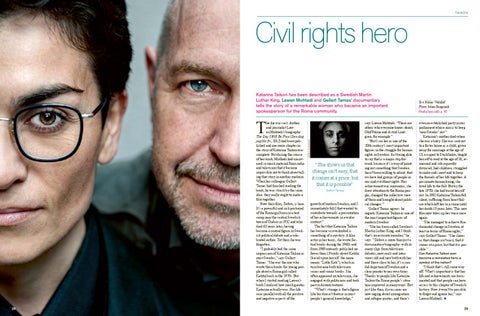 Civil rights hero Katarina Taikon has been described as a Swedish Martin Luther King. Lawen Mohtadi and Gellert Tamas’ documentary tells the story of a remarkable woman who became an important spokesperson for the Roma community.

he die was cast. Author and journalist Lawen Mohtadi’s biography The Day I Will Be Free (Den dag jag blir fri, 2012) had been published and one more chapter in the story of Katarina Taikon was complete. But during the course of her work, Mothadi had uncovered so much material from radio and television that it became impossible not to think about telling that story in another medium. When her colleague Gellert Tamas had finished reading the book, he was struck by the same idea: they really ought to make a film together. Now their film, Taikon, is here. It’s a powerful and rich portrayal of the Roma girl born in a tent camp near the central Swedish town of Örebro in 1932 and who died 63 years later, having become a central figure in Swedish political debate and a celebrated author. Yet then she was forgotten. “I probably had the same impression of Katarina Taikon as most Swedes,” says Gellert Tamas. “She was the one who wrote those books for young people about a Roma girl called Katitzi back in the 1970s. But when I started reading Lawen’s book I realised how much greater Katarina actually was. Her life runs parallel with all the positive and negative aspects of the

“She shows us that change isn’t easy, that it comes at a price, but that it is possible” Gellert Tamas

growth of modern Sweden, and I immediately felt I that wanted to contribute towards a presentation of her achievements in a wider context.” The fact that Katarina Taikon has become so overlooked is something of a mystery. A film actor in her teens, she wrote factual books during the 1960s and from 1969 onwards published no fewer than 13 books about Katitzi (based upon herself: the name means “Little Kati”), which in turn became both television series and comic books. She often appeared on television, she engaged with politicians and took part in demonstrations. “What’s strange is that a figure like her doesn’t feature in most people’s general knowledge,”

says Lawen Mohtadi. “There are others who everyone knows about, Olof Palme and Astrid Lindgren, for example.” “But I see her as one of the 20th century’s most important figures in the struggle for human rights in Sweden. Just being able to say that is a major step forward, because it’s a way of pointing out something that Sweden hasn’t been willing to admit: that we have had groups of people in our midst without rights. Her achievement was enormous, she drew attention to the Roma people, changed the collective view of them and brought about political changes.” Gellert Tamas agrees: he regards Katarina Taikon as one of the most important figures of modern Sweden. “She has been called Sweden’s Martin Luther King, and I think that’s an accurate moniker,” he says. “Taikon is more than just a documentary biography: with its many clips from television debates, newsreels and interviews old and new both with her and those close to her, it’s a candid depiction of Sweden and a clear pointer to our own times. Thanks to people like Katarina Taikon the Roma people’s situation improved in many ways. But just like then, discussions are now raging about immigration and refugee quotas, and there’s

even an established party in our parliament whose aim is to keep ‘non-Swedes’ out.” Katarina’s mother died when she was a baby. She was sent out to a foster home as a child, given away for marriage at the age of 13, escaped to Stockholm, taught herself to read at the age of 26, remarried and subsequently divorced, had children, struggled to make ends meet and to keep the threads of her life together. A passionate human being, she lived life to the full. But by the late 1970s she had burnt herself out. In 1982 Katarina Taikon fell silent, suffering from heart failure which left her in a coma until her death 13 years later. This new film now takes up her voice once again. “She managed to achieve fundamental change in Sweden, at least in terms of Roma rights,” says Gellert Tamas. “She shows us that change isn’t easy, that it comes at a price, but that it is possible.”

Can Katarina Taikon ever become a reinstated hero, a symbol of the nation?

“I think that’s still some way off. What’s important is that her life and achievements are documented and that people can have access to this chapter of Swedish history. Now it won’t be possible to forget and ignore her,” says Lawen Mohtadi. ● 29 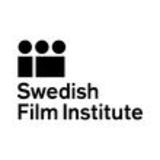 A magazine from the Swedish Film Institute.

A magazine from the Swedish Film Institute.