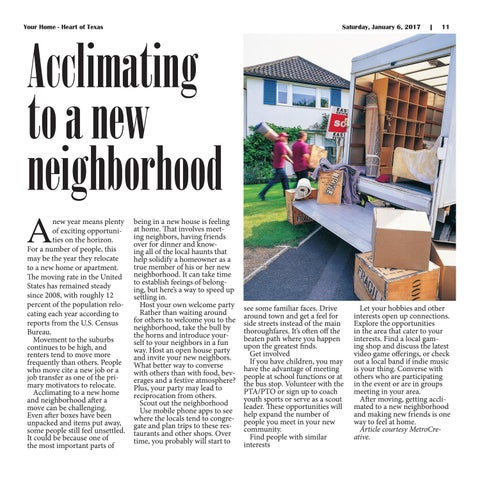 Your Home - Heart of Texas

Acclimating to a new neighborhood

new year means plenty of exciting opportunities on the horizon. For a number of people, this may be the year they relocate to a new home or apartment. The moving rate in the United States has remained steady since 2008, with roughly 12 percent of the population relocating each year according to reports from the U.S. Census Bureau. Movement to the suburbs continues to be high, and renters tend to move more frequently than others. People who move cite a new job or a job transfer as one of the primary motivators to relocate. Acclimating to a new home and neighborhood after a move can be challenging. Even after boxes have been unpacked and items put away, some people still feel unsettled. It could be because one of the most important parts of

being in a new house is feeling at home. That involves meeting neighbors, having friends over for dinner and knowing all of the local haunts that help solidify a homeowner as a true member of his or her new neighborhood. It can take time to establish feeings of belonging, but hereâ&#x20AC;&#x2122;s a way to speed up settling in. Host your own welcome party Rather than waiting around for others to welcome you to the neighborhood, take the bull by the horns and introduce yourself to your neighbors in a fun way. Host an open house party and invite your new neighbors. What better way to converse with others than with food, beverages and a festive atmosphere? Plus, your party may lead to reciprocation from others. Scout out the neighborhood Use mobile phone apps to see where the locals tend to congregate and plan trips to these restaurants and other shops. Over time, you probably will start to

see some familiar faces. Drive around town and get a feel for side streets instead of the main thoroughfares. Itâ&#x20AC;&#x2122;s often off the beaten path where you happen upon the greatest finds. Get involved If you have children, you may have the advantage of meeting people at school functions or at the bus stop. Volunteer with the PTA/PTO or sign up to coach youth sports or serve as a scout leader. These opportunities will help expand the number of people you meet in your new community. Find people with similar interests

Let your hobbies and other interests open up connections. Explore the opportunities in the area that cater to your interests. Find a local gaming shop and discuss the latest video game offerings, or check out a local band if indie music is your thing. Converse with others who are participating in the event or are in groups meeting in your area. After moving, getting acclimated to a new neighborhood and making new friends is one way to feel at home. Article courtesy MetroCreative.