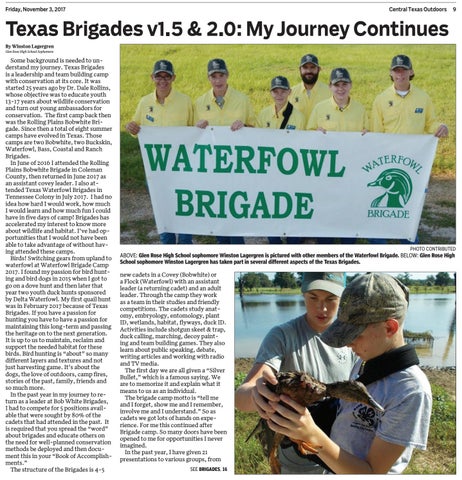 Some background is needed to understand my journey. Texas Brigades is a leadership and team building camp with conservation at its core. It was started 25 years ago by Dr. Dale Rollins, whose objective was to educate youth 13-17 years about wildlife conservation and turn out young ambassadors for conservation. The first camp back then was the Rolling Plains Bobwhite Brigade. Since then a total of eight summer camps have evolved in Texas. Those camps are two Bobwhite, two Buckskin, Waterfowl, Bass, Coastal and Ranch Brigades. In June of 2016 I attended the Rolling Plains Bobwhite Brigade in Coleman County, then returned in June 2017 as an assistant covey leader. I also attended Texas Waterfowl Brigades in Tennessee Colony in July 2017. I had no idea how hard I would work, how much I would learn and how much fun I could have in five days of camp! Brigades has accelerated my interest to know more about wildlife and habitat. I’ve had opportunities that I would not have been able to take advantage of without having attended these camps. Birds! Switching gears from upland to waterfowl at Waterfowl Brigade Camp 2017. I found my passion for bird hunting and bird dogs in 2015 when I got to go on a dove hunt and then later that year two youth duck hunts sponsored by Delta Waterfowl. My first quail hunt was in February 2017 because of Texas Brigades. If you have a passion for hunting you have to have a passion for maintaining this long-term and passing the heritage on to the next generation. It is up to us to maintain, reclaim and support the needed habitat for these birds. Bird hunting is “about” so many different layers and textures and not just harvesting game. It’s about the dogs, the love of outdoors, camp fires, stories of the past, family, friends and so much more. In the past year in my journey to return as a leader at Bob White Brigades, I had to compete for 5 positions available that were sought by 80% of the cadets that had attended in the past. It is required that you spread the “word” about brigades and educate others on the need for well-planned conservation methods be deployed and then document this in your “Book of Accomplishments.” The structure of the Brigades is 4-5

new cadets in a Covey (Bobwhite) or a Flock (Waterfowl) with an assistant leader (a returning cadet) and an adult leader. Through the camp they work as a team in their studies and friendly competitions. The cadets study anatomy, embryology, entomology, plant ID, wetlands, habitat, flyways, duck ID. Activities include shotgun skeet & trap, duck calling, marching, decoy painting and team building games. They also learn about public speaking, debate, writing articles and working with radio and TV media. The first day we are all given a “Silver Bullet,” which is a famous saying. We are to memorize it and explain what it means to us as an individual. The brigade camp motto is “tell me and I forget, show me and I remember, involve me and I understand.” So as cadets we got lots of hands on experience. For me this continued after Brigade camp. So many doors have been opened to me for opportunities I never imagined. In the past year, I have given 21 presentations to various groups, from SEE BRIGADES, 16