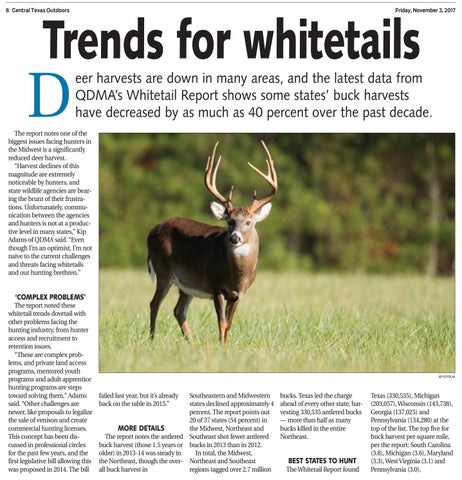 eer harvests are down in many areas, and the latest data from QDMA’s Whitetail Report shows some states’ buck harvests have decreased by as much as 40 percent over the past decade.

The report notes one of the biggest issues facing hunters in the Midwest is a significantly reduced deer harvest. “Harvest declines of this magnitude are extremely noticeable by hunters, and state wildlife agencies are bearing the brunt of their frustrations. Unfortunately, communication between the agencies and hunters is not at a productive level in many states,” Kip Adams of QDMA said. “Even though I’m an optimist, I’m not naive to the current challenges and threats facing whitetails and our hunting brethren.”

‘COMPLEX PROBLEMS’ The report noted these whitetail trends dovetail with other problems facing the hunting industry, from hunter access and recruitment to retention issues. “These are complex problems, and private land access programs, mentored youth programs and adult apprentice hunting programs are steps toward solving them,” Adams said. “Other challenges are newer, like proposals to legalize the sale of venison and create commercial hunting licenses. This concept has been discussed in professional circles for the past few years, and the first legislative bill allowing this was proposed in 2014. The bill

Southeastern and Midwestern states declined approximately 4 percent. The report points out 20 of 37 states (54 percent) in MORE DETAILS the Midwest, Northeast and The report notes the antlered Southeast shot fewer antlered buck harvest (those 1.5 years or bucks in 2013 than in 2012. older) in 2013-14 was steady in In total, the Midwest, the Northeast, though the over- Northeast and Southeast all buck harvest in regions tagged over 2.7 million

bucks. Texas led the charge ahead of every other state, harvesting 330,535 antlered bucks — more than half as many bucks killed in the entire Northeast.