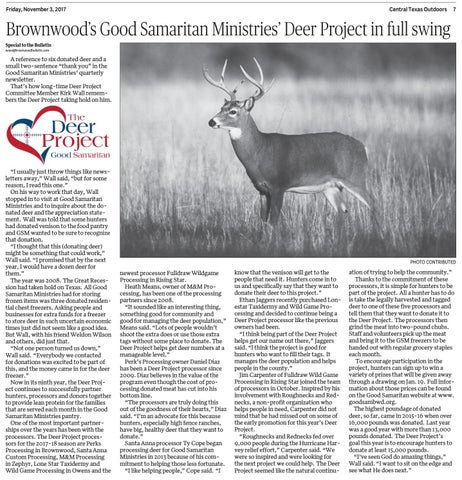 A reference to six donated deer and a small two-sentence “thank you” in the Good Samaritan Ministries’ quarterly newsletter. That’s how long-time Deer Project Committee Member Kirk Wall remembers the Deer Project taking hold on him.

“I usually just throw things like newsletters away,” Wall said, “but for some reason, I read this one.” On his way to work that day, Wall stopped in to visit at Good Samaritan Ministries and to inquire about the donated deer and the appreciation statement. Wall was told that some hunters had donated venison to the food pantry and GSM wanted to be sure to recognize that donation. “I thought that this (donating deer) might be something that could work,” Wall said. “I promised that by the next year, I would have a dozen deer for them.” The year was 2008.  The Great Recession had taken hold on Texas.  All Good Samaritan Ministries had for storing frozen items was three donated residential chest freezers. Asking people and businesses for extra funds for a freezer to store deer in such uncertain economic times just did not seem like a good idea. But Wall, with his friend Weldon Wilson and others, did just that. “Not one person turned us down,” Wall said.  “Everybody we contacted for donations was excited to be part of this, and the money came in for the deer freezer.” Now in its ninth year, the Deer Project continues to successfully partner hunters, processors and donors together to provide lean protein for the families that are served each month in the Good Samaritan Ministries pantry.  One of the most important partnerships over the years has been with the processors. The Deer Project processors for the 2017-18 season are Perks Processing in Brownwood, Santa Anna Custom Processing, M&M Processing in Zephyr, Lone Star Taxidermy and Wild Game Processing in Owens and the

newest processor Fulldraw Wildgame Processing in Rising Star. Heath Means, owner of M&M Processing, has been one of the processing partners since 2008. “It sounded like an interesting thing, something good for community and good for managing the deer population,” Means said. “Lots of people wouldn’t shoot the extra does or use those extra tags without some place to donate. The Deer Project helps get deer numbers at a manageable level.” Perk’s Processing owner Daniel Diaz has been a Deer Project processor since 2009. Diaz believes in the value of the program even though the cost of processing donated meat has cut into his bottom line. “The processors are truly doing this out of the goodness of their hearts,” Diaz said. “I’m an advocate for this because hunters, especially high fence ranches, have big, healthy deer that they want to donate.” Santa Anna processor Ty Cope began processing deer for Good Samaritan Ministries in 2013 because of his commitment to helping those less fortunate. “I like helping people,” Cope said. “I

know that the venison will get to the people that need it. Hunters come in to us and specifically say that they want to donate their deer to this project.” Ethan Jaggers recently purchased Lonestar Taxidermy and Wild Game Processing and decided to continue being a Deer Project processor like the previous owners had been. “I think being part of the Deer Project helps get our name out there,” Jaggers said. “I think the project is good for hunters who want to fill their tags.  It manages the deer population and helps people in the county.” Jim Carpenter of Fulldraw Wild Game Processing in Rising Star joined the team of processors in October. Inspired by his involvement with Roughnecks and Rednecks, a non-profit organization who helps people in need, Carpenter did not mind that he had missed out on some of the early promotion for this year’s Deer Project. “Roughnecks and Rednecks fed over 9,000 people during the Hurricane Harvey relief effort,” Carpenter said. “We were so inspired and were looking for the next project we could help.  The Deer Project seemed like the natural continu-

ation of trying to help the community.” Thanks to the commitment of these processors, it is simple for hunters to be part of the project. All a hunter has to do is take the legally harvested and tagged deer to one of these five processors and tell them that they want to donate it to the Deer Project.  The processors then grind the meat into two-pound chubs.  Staff and volunteers pick up the meat and bring it to the GSM freezers to be handed out with regular grocery staples each month.  To encourage participation in the project, hunters can sign up to win a variety of prizes that will be given away through a drawing on Jan. 19.  Full information about those prices can be found on the Good Samaritan website at www. goodsambwd.org. The highest poundage of donated deer, so far, came in 2015-16 when over 16,000 pounds was donated.  Last year was a good year with more than 13,000 pounds donated.  The Deer Project’s goal this year is to encourage hunters to donate at least 15,000 pounds. “I’ve seen God do amazing things,” Wall said. “I want to sit on the edge and see what He does next.”