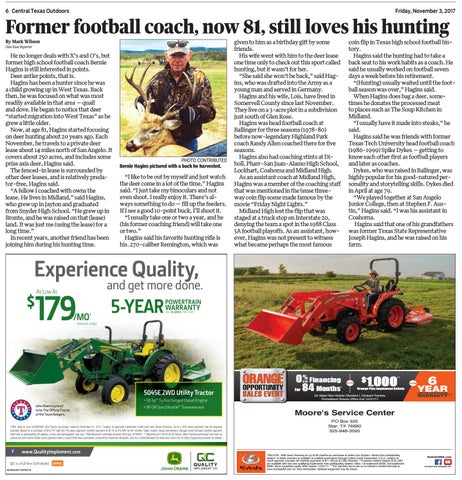 He no longer deals with X’s and O’s, but former high school football coach Bernie Hagins is still interested in points. Deer antler points, that is. Hagins has been a hunter since he was a child growing up in West Texas. Back then, he was focused on what was most readily available in that area — quail and dove. He began to notice that deer “started migration into West Texas” as he grew a little older. Now, at age 81, Hagins started focusing on deer hunting about 20 years ago. Each November, he travels to a private deer lease about 14 miles north of San Angelo. It covers about 250 acres, and includes some prize axis deer, Hagins said. The fenced-in lease is surrounded by other deer leases, and is relatively predator-free, Hagins said. “A fellow I coached with owns the lease. He lives in Midland,” said Hagins, who grew up in Jayton and graduated from Snyder High School. “He grew up in Bronte, and he was raised on that (lease) land. It was just me (using the lease) for a long time.” In recent years, another friend has been joining him during his hunting time.

PHOTO CONTRIBUTED Bernie Hagins pictured with a buck he harvested.

“I like to be out by myself and just watch the deer come in a lot of the time,” Hagins said. “I just take my binoculars and not even shoot. I really enjoy it. There’s always something to do — fill up the feeders. If I see a good 10-point buck, I’ll shoot it. “I usually take one or two a year, and he (his former coaching friend) will take one or two.” Hagins said his favorite hunting rifle is his .270-caliber Remington, which was

given to him as a birthday gift by some friends. His wife went with him to the deer lease one time only to check out this sport called hunting, but it wasn’t for her. “She said she won’t be back,” said Hagins, who was drafted into the Army as a young man and served in Germany. Hagins and his wife, Lois, have lived in Somervell County since last November. They live on a 3-acre plot in a subdivision just south of Glen Rose. Hagins was head football coach at Ballinger for three seasons (1978-80) before now-legendary Highland Park coach Randy Allen coached there for five seasons. Hagins also had coaching stints at Diboll, Pharr-San Juan-Alamo High School, Lockhart, Coahoma and Midland High. As an assistant coach at Midland High, Hagins was a member of the coaching staff that was mentioned in the tense threeway coin flip scene made famous by the movie “Friday Night Lights.”  Midland High lost the flip that was staged at a truck stop on Interstate 20, denying the team a spot in the 1988 Class 5A football playoffs. As an assistant, however, Hagins was not present to witness what became perhaps the most famous

coin flip in Texas high school football history. Hagins said the hunting had to take a back seat to his work habits as a coach. He said he usually worked on football seven days a week before his retirement. “(Hunting) usually waited until the football season was over,” Hagins said. When Hagins does bag a deer, sometimes he donates the processed meat to places such as The Soup Kitchen in Midland. “I usually have it made into steaks,” he said. Hagins said he was friends with former Texas Tech University head football coach (1986-1999) Spike Dykes — getting to know each other first as football players and later as coaches. Dykes, who was raised in Ballinger, was highly popular for his good-natured personality and storytelling skills. Dykes died in April at age 79. “We played together at San Angelo Junior College, then at Stephen F. Austin,” Hagins said. “I was his assistant in Coahoma. Hagins said that one of his grandfathers was former Texas State Representative Joseph Hagins, and he was raised on his farm.

*0% A.P.R., 20% down financing for up to 84 months on purchases of select new Kubota L Series from participating dealers’ in-stock inventory is available to qualified purchasers through Kubota Credit Corporation, U.S.A.; subject to credit approval. Example: 84 monthly payments of $11.90 per $1,000 financed. **Customer instant rebates of $1,000 are available with two new qualifying implements from participating dealers’ stock. 1st implement $700, 2nd implement $300. Some exceptions apply. Offer expires 12/31/17. ***For warranty terms see us or Kubota’s Limited Warranty at www.KubotaUSA.com for more information. Optional equipment may be shown.