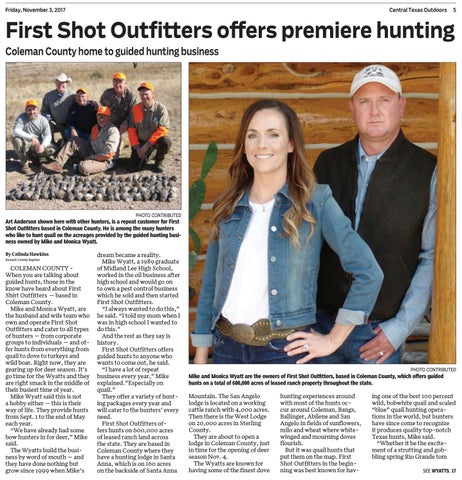 Art Anderson shown here with other hunters, is a repeat customer for First Shot Outfitters based in Coleman County. He is among the many hunters who like to hunt quail on the acreages provided by the guided hunting business owned by Mike and Monica Wyatt. By Celinda Hawkins Runnels County Register

COLEMAN COUNTY When you are talking about guided hunts, those in the know have heard about First Shirt Outfitters — based in Coleman County. Mike and Monica Wyatt, are the husband and wife team who own and operate First Shot Outfitters and cater to all types of hunters — from corporate groups to individuals — and offer hunts from everything from quail to dove to turkeys and wild boar. Right now, they are gearing up for deer season. It’s go time for the Wyatts and they are right smack in the middle of their busiest time of year. Mike Wyatt said this is not a hobby either — this is their way of life. They provide hunts from Sept. 1 to the end of May each year. “We have already had some bow hunters in for deer,” Mike said. The Wyatts build the business by word of mouth — and they have done nothing but grow since 1999 when Mike’s

dream became a reality. Mike Wyatt, a 1989 graduate of Midland Lee High School, worked in the oil business after high school and would go on to own a pest control business which he sold and then started First Shot Outfitters. “I always wanted to do this,” he said. “I told my mom when I was in high school I wanted to do this.” And the rest as they say is history. First Shot Outfitters offers guided hunts to anyone who wants to come out, he said. “I have a lot of repeat business every year,” Mike explained.”Especially on quail.” They offer a variety of hunting packages every year and will cater to the hunters’ every need. First Shot Outfitters offers hunts on 600,000 acres of leased ranch land across the state. They are based in Coleman County where they have a hunting lodge in Santa Anna, which is on 160 acres on the backside of Santa Anna

Mike and Monica Wyatt are the owners of First Shot Outfitters, based in Coleman County, which offers guided hunts on a total of 600,000 acres of leased ranch property throughout the state.

Mountain. The San Angelo lodge is located on a working cattle ranch with 4,000 acres. Then there is the West Lodge on 20,000 acres in Sterling County. They are about to open a lodge in Coleman County, just in time for the opening of deer season Nov. 4. The Wyatts are known for having some of the finest dove

hunting experiences around with most of the hunts occur around Coleman, Bangs, Ballinger, Abilene and San Angelo in fields of sunflowers, milo and wheat where whitewinged and mourning doves flourish. But it was quail hunts that put them on the map. First Shot Outfitters in the beginning was best known for hav-

ing one of the best 100 percent wild, bobwhite quail and scaled “blue” quail hunting operations in the world, but hunters have since come to recognize it produces quality top-notch Texas hunts, Mike said. “Whether it be the excitement of a strutting and gobbling spring Rio Grande tom SEE WYATTS, 17