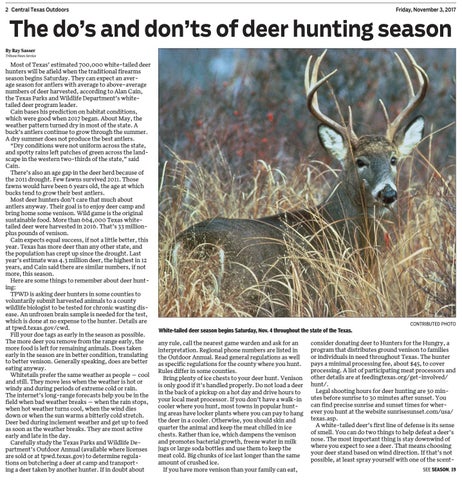 The do’s and don’ts of deer hunting season

Most of Texas’ estimated 700,000 white-tailed deer hunters will be afield when the traditional firearms season begins Saturday. They can expect an average season for antlers with average to above-average numbers of deer harvested, according to Alan Cain, the Texas Parks and Wildlife Department’s whitetailed deer program leader. Cain bases his prediction on habitat conditions, which were good when 2017 began. About May, the weather pattern turned dry in most of the state. A buck’s antlers continue to grow through the summer. A dry summer does not produce the best antlers. “Dry conditions were not uniform across the state, and spotty rains left patches of green across the landscape in the western two-thirds of the state,” said Cain. There’s also an age gap in the deer herd because of the 2011 drought. Few fawns survived 2011. Those fawns would have been 6 years old, the age at which bucks tend to grow their best antlers. Most deer hunters don’t care that much about antlers anyway. Their goal is to enjoy deer camp and bring home some venison. Wild game is the original sustainable food. More than 664,000 Texas whitetailed deer were harvested in 2016. That’s 33 millionplus pounds of venison. Cain expects equal success, if not a little better, this year. Texas has more deer than any other state, and the population has crept up since the drought. Last year’s estimate was 4.3 million deer, the highest in 12 years, and Cain said there are similar numbers, if not more, this season. Here are some things to remember about deer hunting: TPWD is asking deer hunters in some counties to voluntarily submit harvested animals to a county wildlife biologist to be tested for chronic wasting disease. An unfrozen brain sample is needed for the test, which is done at no expense to the hunter. Details are at tpwd.texas.gov/cwd. Fill your doe tags as early in the season as possible. The more deer you remove from the range early, the more food is left for remaining animals. Does taken early in the season are in better condition, translating to better venison. Generally speaking, does are better eating anyway. Whitetails prefer the same weather as people — cool and still. They move less when the weather is hot or windy and during periods of extreme cold or rain. The internet’s long-range forecasts help you be in the field when bad weather breaks — when the rain stops, when hot weather turns cool, when the wind dies down or when the sun warms a bitterly cold stretch. Deer bed during inclement weather and get up to feed as soon as the weather breaks. They are most active early and late in the day. Carefully study the Texas Parks and Wildlife Department’s Outdoor Annual (available where licenses are sold or at tpwd.texas.gov) to determine regulations on butchering a deer at camp and transporting a deer taken by another hunter. If in doubt about

White-tailed deer season begins Saturday, Nov. 4 throughout the state of the Texas.

any rule, call the nearest game warden and ask for an interpretation. Regional phone numbers are listed in the Outdoor Annual. Read general regulations as well as specific regulations for the county where you hunt. Rules differ in some counties. Bring plenty of ice chests to your deer hunt. Venison is only good if it’s handled properly. Do not load a deer in the back of a pickup on a hot day and drive hours to your local meat processor. If you don’t have a walk-in cooler where you hunt, most towns in popular hunting areas have locker plants where you can pay to hang the deer in a cooler. Otherwise, you should skin and quarter the animal and keep the meat chilled in ice chests. Rather than ice, which dampens the venison and promotes bacterial growth, freeze water in milk jugs or large soda bottles and use them to keep the meat cold. Big chunks of ice last longer than the same amount of crushed ice. If you have more venison than your family can eat,

consider donating deer to Hunters for the Hungry, a program that distributes ground venison to families or individuals in need throughout Texas. The hunter pays a minimal processing fee, about $45, to cover processing. A list of participating meat processors and other details are at feedingtexas.org/get-involved/ hunt/. Legal shooting hours for deer hunting are 30 minutes before sunrise to 30 minutes after sunset. You can find precise sunrise and sunset times for wherever you hunt at the website sunrisesunset.com/usa/ texas.asp. A white-tailed deer’s first line of defense is its sense of smell. You can do two things to help defeat a deer’s nose. The most important thing is stay downwind of where you expect to see a deer. That means choosing your deer stand based on wind direction. If that’s not possible, at least spray yourself with one of the scentSEE SEASON, 19