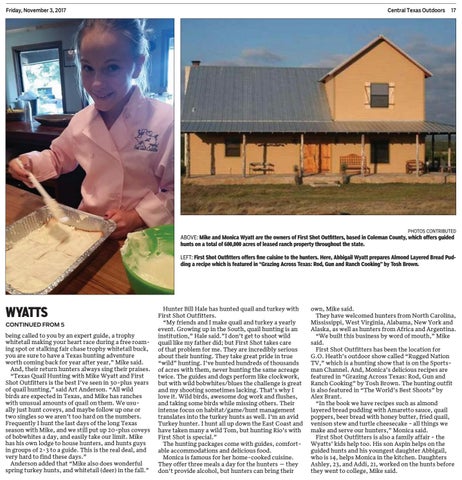 ABOVE: Mike and Monica Wyatt are the owners of First Shot Outfitters, based in Coleman County, which offers guided hunts on a total of 600,000 acres of leased ranch property throughout the state. LEFT: First Shot Outfitters offers fine cuisine to the hunters. Here, Abbigail Wyatt prepares Almond Layered Bread Pudding a recipe which is featured in “Grazing Across Texas: Rod, Gun and Ranch Cooking” by Tosh Brown.

being called to you by an expert guide, a trophy whitetail making your heart race during a free roaming spot or stalking fair chase trophy whitetail buck, you are sure to have a Texas hunting adventure worth coming back for year after year,” Mike said. And, their return hunters always sing their praises. “Texas Quail Hunting with Mike Wyatt and First Shot Outfitters is the best I’ve seen in 30-plus years of quail hunting,” said Art Anderson. “All wild birds are expected in Texas, and Mike has ranches with unusual amounts of quail on them. We usually just hunt coveys, and maybe follow up one or two singles so we aren’t too hard on the numbers. Frequently I hunt the last days of the long Texas season with Mike, and we still put up 20-plus coveys of bobwhites a day, and easily take our limit. Mike has his own lodge to house hunters, and hunts guys in groups of 2-3 to a guide. This is the real deal, and very hard to find these days.” Anderson added that “Mike also does wonderful spring turkey hunts, and whitetail (deer) in the fall.”

Hunter Bill Hale has hunted quail and turkey with First Shot Outfitters. “My friends and I make quail and turkey a yearly event. Growing up in the South, quail hunting is an institution,” Hale said.”I don’t get to shoot wild quail like my father did; but First Shot takes care of that problem for me. They are incredibly serious about their hunting. They take great pride in true “wild” hunting. I’ve hunted hundreds of thousands of acres with them, never hunting the same acreage twice. The guides and dogs perform like clockwork, but with wild bobwhites/blues the challenge is great and my shooting sometimes lacking. That’s why I love it. Wild birds, awesome dog work and flushes, and taking some birds while missing others. Their intense focus on habitat/game/hunt management translates into the turkey hunts as well. I’m an avid Turkey hunter. I hunt all up down the East Coast and have taken many a wild Tom, but hunting Rio’s with First Shot is special.” The hunting packages come with guides, comfortable accommodations and delicious food. Monica is famous for her home-cooked cuisine. They offer three meals a day for the hunters — they don’t provide alcohol, but hunters can bring their

own, Mike said. They have welcomed hunters from North Carolina, Mississippi, West Virginia, Alabama, New York and Alaska, as well as hunters from Africa and Argentina. “We built this business by word of mouth,” Mike said. First Shot Outfitters has been the location for G.O. Heath’s outdoor show called “Rugged Nation TV,” which is a hunting show that is on the Sportsman Channel. And, Monica’s delicious recipes are featured in “Grazing Across Texas: Rod, Gun and Ranch Cooking” by Tosh Brown. The hunting outfit is also featured in “The World’s Best Shoots” by Alex Brant. “In the book we have recipes such as almond layered bread pudding with Amaretto sauce, quail poppers, beer bread with honey butter, fried quail, venison stew and turtle cheesecake - all things we make and serve our hunters,” Monica said. First Shot Outfitters is also a family affair - the Wyatts’ kids help too. His son Aspin helps on the guided hunts and his youngest daughter Abbigail, who is 14, helps Monica in the kitchen. Daughters Ashley, 23, and Addi, 21, worked on the hunts before they went to college, Mike said.