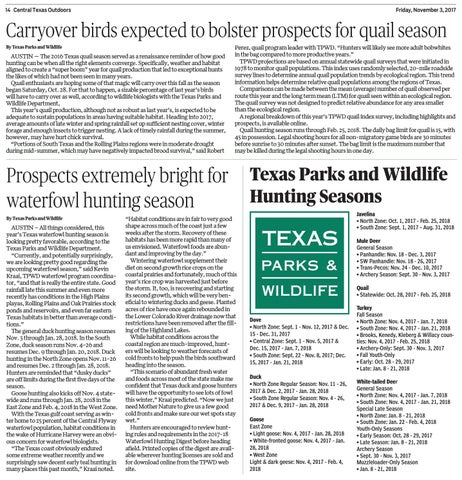 AUSTIN — The 2016 Texas quail season served as a renaissance reminder of how good hunting can be when all the right elements converge. Specifically, weather and habitat aligned to create a “super boom” year for quail production that led to exceptional hunts the likes of which had not been seen in many years. Quail enthusiasts are hoping some of that magic will carry over this fall as the season began Saturday, Oct. 28. For that to happen, a sizable percentage of last year’s birds will have to carry over as well, according to wildlife biologists with the Texas Parks and Wildlife Department, This year’s quail production, although not as robust as last year’s, is expected to be adequate to sustain populations in areas having suitable habitat. Heading into 2017, average amounts of late winter and spring rainfall set up sufficient nesting cover, winter forage and enough insects to trigger nesting. A lack of timely rainfall during the summer, however, may have hurt chick survival. “Portions of South Texas and the Rolling Plains regions were in moderate drought during mid-summer, which may have negatively impacted brood survival,” said Robert

Perez, quail program leader with TPWD. “Hunters will likely see more adult bobwhites in the bag compared to more productive years.” TPWD projections are based on annual statewide quail surveys that were initiated in 1978 to monitor quail populations. This index uses randomly selected, 20-mile roadside survey lines to determine annual quail population trends by ecological region. This trend information helps determine relative quail populations among the regions of Texas. Comparisons can be made between the mean (average) number of quail observed per route this year and the long term mean (LTM) for quail seen within an ecological region. The quail survey was not designed to predict relative abundance for any area smaller than the ecological region. A regional breakdown of this year’s TPWD quail index survey, including highlights and prospects, is available online. Quail hunting season runs through Feb. 25, 2018. The daily bag limit for quail is 15, with 45 in possession. Legal shooting hours for all non-migratory game birds are 30 minutes before sunrise to 30 minutes after sunset. The bag limit is the maximum number that may be killed during the legal shooting hours in one day.

AUSTIN – All things considered, this year’s Texas waterfowl hunting season is looking pretty favorable, according to the Texas Parks and Wildlife Department. “Currently, and potentially surprisingly, we are looking pretty good regarding the upcoming waterfowl season,” said Kevin Kraai, TPWD waterfowl program coordinator, “and that is really the entire state. Good rainfall late this summer and even more recently has conditions in the High Plains playas, Rolling Plains and Oak Prairies stock ponds and reservoirs, and even far eastern Texas habitats in better than average conditions.” The general duck hunting season resumes Nov. 3 through Jan. 28, 2018. In the South Zone, duck season runs Nov. 4-26 and resumes Dec. 9 through Jan. 20, 2018. Duck hunting in the North Zone opens Nov. 11-26 and resumes Dec. 2 through Jan. 28, 2018. Hunters are reminded that “dusky ducks” are off limits during the first five days of the season. Goose hunting also kicks off Nov. 4 statewide and runs through Jan. 28, 2018 in the East Zone and Feb. 4, 2018 in the West Zone. With the Texas gulf coast serving as winter home to 25 percent of the Central Flyway waterfowl population, habitat conditions in the wake of Hurricane Harvey were an obvious concern for waterfowl biologists. “The Texas coast obviously endured some extreme weather recently and we surprisingly saw decent early teal hunting in many places this past month,” Kraai noted.

“Habitat conditions are in fair to very good shape across much of the coast just a few weeks after the storm. Recovery of these habitats has been more rapid than many of us envisioned. Waterfowl foods are abundant and improving by the day.” Wintering waterfowl supplement their diet on second growth rice crops on the coastal prairies and fortunately, much of this year’s rice crop was harvested just before the storm. It, too, is recovering and starting its second growth, which will be very beneficial to wintering ducks and geese. Planted acres of rice have once again rebounded in the Lower Colorado River drainage now that restrictions have been removed after the filling of the Highland Lakes. While habitat conditions across the coastal region are much-improved, hunters will be looking to weather forecasts of cold fronts to help push the birds southward heading into the season. “This scenario of abundant fresh water and foods across most of the state make me confident that Texas duck and goose hunters will have the opportunity to see lots of fowl this winter,” Kraai predicted. “Now we just need Mother Nature to give us a few good cold fronts and make sure our wet spots stay wet.” Hunters are encouraged to review hunting rules and requirements in the 2017-18 Waterfowl Hunting Digest before heading afield. Printed copies of the digest are available wherever hunting licenses are sold and for download online from the TPWD web site.