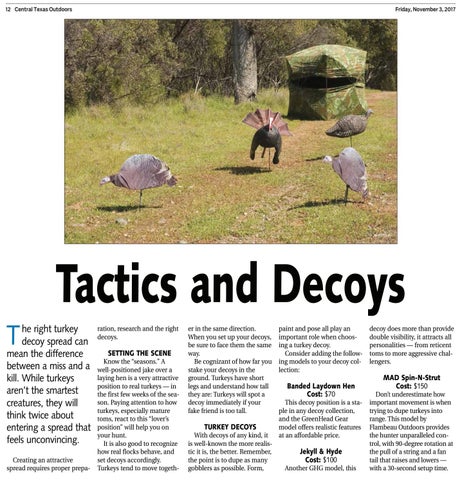 he right turkey decoy spread can mean the difference between a miss and a kill. While turkeys aren’t the smartest creatures, they will think twice about entering a spread that feels unconvincing. Creating an attractive spread requires proper prepa-

ration, research and the right decoys.

SETTING THE SCENE Know the “seasons.” A well-positioned jake over a laying hen is a very attractive position to real turkeys — in the first few weeks of the season. Paying attention to how turkeys, especially mature toms, react to this “lover’s position” will help you on your hunt. It is also good to recognize how real flocks behave, and set decoys accordingly. Turkeys tend to move togeth-

er in the same direction. When you set up your decoys, be sure to face them the same way. Be cognizant of how far you stake your decoys in the ground. Turkeys have short legs and understand how tall they are: Turkeys will spot a decoy immediately if your fake friend is too tall.

TURKEY DECOYS With decoys of any kind, it is well-known the more realistic it is, the better. Remember, the point is to dupe as many gobblers as possible. Form,

paint and pose all play an important role when choosing a turkey decoy. Consider adding the following models to your decoy collection:

Banded Laydown Hen Cost: $70 This decoy position is a staple in any decoy collection, and the GreenHead Gear model offers realistic features at an affordable price.

decoy does more than provide double visibility, it attracts all personalities — from reticent toms to more aggressive challengers.

MAD Spin-N-Strut Cost: $150 Don’t underestimate how important movement is when trying to dupe turkeys into range. This model by Flambeau Outdoors provides the hunter unparalleled control, with 90-degree rotation at the pull of a string and a fan tail that raises and lowers — with a 30-second setup time.