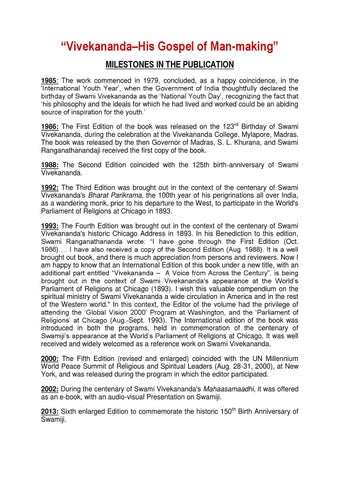 “Vivekananda–His Gospel of Man-making” MILESTONES IN THE PUBLICATION 1985: The work commenced in 1979, concluded, as a happy coincidence, in the 'International Youth Year’, when the Government of India thoughtfully declared the birthday of Swami Vivekananda as the ‘National Youth Day’, recognizing the fact that ‘his philosophy and the ideals for which he had lived and worked could be an abiding source of inspiration for the youth.’ 1986: The First Edition of the book was released on the 123 rd Birthday of Swami Vivekananda, during the celebration at the Vivekananda College, Mylapore, Madras. The book was released by the then Governor of Madras, S. L. Khurana, and Swami Ranganathanandaji received the first copy of the book. 1988: The Second Edition coincided with the 125th birth-anniversary of Swami Vivekananda. 1992: The Third Edition was brought out in the context of the centenary of Swami Vivekananda's Bharat Parikrama, the 100th year of his perigrinations all over India, as a wandering monk, prior to his departure to the West, to participate in the World's Parliament of Religions at Chicago in 1893. 1993: The Fourth Edition was brought out in the context of the centenary of Swami Vivekananda's historic Chicago Address in 1893. In his Benediction to this edition, Swami Ranganathananda wrote: “I have gone through the First Edition (Oct. 1986)…. I have also received a copy of the Second Edition (Aug. 1988). It is a well brought out book, and there is much appreciation from persons and reviewers. Now I am happy to know that an International Edition of this book under a new title, with an additional part entitled “Vivekananda – A Voice from Across the Century”, is being brought out in the context of Swami Vivekananda's appearance at the World’s Parliament of Religions at Chicago (1893). I wish this valuable compendium on the spiritual ministry of Swami Vivekananda a wide circulation in America and in the rest of the Western world." In this context, the Editor of the volume had the privilege of attending the ‘Global Vision 2000’ Program at Washington, and the ‘Parliament of Religions’ at Chicago (Aug.-Sept. 1993). The International edition of the book was introduced in both the programs, held in commemoration of the centenary of Swamiji’s appearance at the World’s Parliament of Religions at Chicago. It was well received and widely welcomed as a reference work on Swami Vivekananda. 2000: The Fifth Edition (revised and enlarged) coincided with the UN Millennium World Peace Summit of Religious and Spiritual Leaders (Aug. 28-31, 2000), at New York, and was released during the program in which the editor participated. 2002: During the centenary of Swami Vivekananda's Mahaasamaadhi, it was offered as an e-book, with an audio-visual Presentation on Swamiji. 2013: Sixth enlarged Edition to commemorate the historic 150th Birth Anniversary of Swamiji.