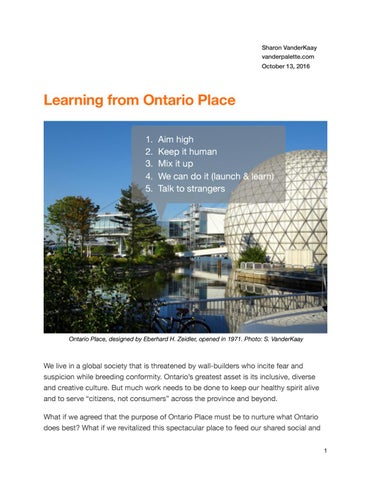 We live in a global society that is threatened by wall-builders who incite fear and suspicion while breeding conformity. Ontario’s greatest asset is its inclusive, diverse and creative culture. But much work needs to be done to keep our healthy spirit alive and to serve “citizens, not consumers” across the province and beyond.

What if we agreed that the purpose of Ontario Place must be to nurture what Ontario does best? What if we revitalized this spectacular place to feed our shared social and 1

economic aspirations in ways that are innovative and exciting? What if Ontario Place was once again (as portrayed in the original theme song) “a place to stand, a place to grow”—for Ontarians as well as on a worldwide stage?

When it opened in 1971, Ontario Place was a glamorous high tech gem by the lake. We&#39;d never seen anyplace like it anywhere. Exhibits touted the province&#39;s industrial achievements and abundant natural resources. The Trillium bar was an ideal place to wow friends and relatives from out of town. Suspended over the water inside one of the space-age pods it was obvious that Ontario was boldly setting itself apart by being far from provincial. The Forum amphitheater and Children&#39;s Village (see photos of the original structures, page 6 of this document) were hubs of activity, interaction and imagination.

Most visitors loved the architecture and the overall setting, but found the programming inside the pods didactic and boring. Audiences for the exhibits were treated as passive consumers, rather than active citizen-participants. As decades passed, the assumption that citizens wanted mass market entertainment resulted in cheap, generic, mind-numbing theme park additions that drove diverse audiences away. Wrong questions led to wrong answers.

I was a frequent visitor (and a new Canadian immigrant) during the early days of Ontario Place. In subsequent decades I was a less frequent visitor, although l worked with Eb Zeidler for fifteen years and enjoyed many Zeidler oﬃce parties in the Trillium Restaurant. During four visits between September 15 and 25, 2016, I was captivated by the entire experience that the in/future event organizers and participants created.

What have I learned over 45 years by reflecting on this extraordinary site&#39;s legacy and potential? I believe five core values need to be preserved and amplified. Scenes from in/future event September 15-25, 2016

What have I learned by reflecting on that event and this extraordinary site&#39;s legacy and potential over 45 years?

In addition to a strong, simply stated higher purpose, Ontario Place needs to identify specific values that will allow it to achieve its full potential while avoiding wasteful investments. These values must be seen as defining a place to stand and grow for local visitors as well as Ontarians who come here from Windsor, Cornwall or Thunder Bay.

I believe five core values need to preserved and amplified:

1. Aim high: Eb Zeidler believed that people have high aspirations, as well as a shared need to connect to each other and the land. He did not underestimate his audience. The beautiful structures and enduring aura of Ontario Place make the setting special and make us as visitors feel special. It is important to understand that &quot;aim high&quot; does not necessarily mean &quot;spend a lot of money on slick, one shot renovations.&quot; Instead, we need to pursue a phased &quot;launch and learn&quot; approach to what happens here, once structural remediation is addressed.

3. Mix it up: The original Ontario Place aimed to attract people of all backgrounds, ages, abilities, cultures and economic means. It oﬀered venues that ranged from high tech pods, to nature walks, to creative play. The in/future event further demonstrated the appeal of oﬀering choice and challenge to diverse visitors, through a broad range of music and art installations. The social benefits of mixing it up include instilling empathy and helping us see things diﬀerently. Monocultures are bad from an economic, psychological and social standpoint. Ontario Place can brings us together, sparked by variety and united by our curiosity.

4. We can do it: When it opened, Ontario Place celebrated a can-do culture, which was also evident during the in/future event (but absent during the amusement park years). There&#39;s a reason that &quot;maker spaces&quot; are suddenly in high demand by schools and communities. Over the past two or three generations the natural human can-do spirit was overtaken by predominantly post-industrial &quot;hands oﬀ&quot; education. During that time, working with our hands was dismissed by many educators as a path to &quot;blue collar&quot; or &quot;starving artist&quot; careers. As a result, creative thinking, problem solving and collaborative skills that come from inventing, tinkering and making things diminished. Loneliness, boredom and antisocial behaviour can be linked to a &quot;can&#39;t do&quot; mindset. A culture of innovation is not all about technology; we need places that celebrate experiments and instil confidence by making things and knowing &quot;we can do it.&quot;

5. Talk to strangers: Conversation is the antidote to fear and misunderstanding; much suﬀering and pathology in the world can be linked to unasked questions. How can we spark inquiry, connections, and conversations? As it stands, Ontario Place is a catalyst for conversation with its many layers of history, dramatic architecture, views of the cit(ies) and

integration of nature. It encourages interaction by oďŹ&amp;#x20AC;ering a variety of places to relax and mingle. Stimulating art installations at the in/future event further encouraged people to interact. (&quot;Hey, what do you think about that revolving tree?&quot;) Gathering spaces for all kinds of conferences, forums, fireside chats and spontaneous exchange can be designed into the pods and pavilions. What if the slogan for a revived Ontario Place was &quot;Come on over and talk to strangers&quot;? Living proof of this concept can be found at 401 Richmond St. West and Evergreen Brick Works. These hubs of diverse, inclusive, unique activities bring people together through shared values. Their international acclaim has been achieved by blending revenue generation with elements that attract thousands of visitors who take part in animated conversations.

A place to grow during in/future and &quot;SSSpun&quot; revolving tree art installation by Robert Hengeveld

CONCLUSION: A recipe for building greatness Whenever a project is under heavy public scrutiny involving diverse stakeholders that include naysayers and champions, there is a threat of settling for mediocrity. Project fatigue sets in, deadlines loom, and the inevitable cost-over-value critics emerge. Standard language vision statements and design principles are not strong enough to carry a project through all the stages required to see greatness take shape in the form of built reality.

In order to build greatnessâ&amp;#x20AC;&amp;#x201D;to create places people love and want to be; places that stir our imagination and restore our energyâ&amp;#x20AC;&amp;#x201D;project leaders need to craft a higher purpose statement along with simple but evocative shared values. These values must not be expressed in vague, generic, clinical or corporate terms. Ontarians are citizens, not consumers; we remove barriers, we don&#39;t build walls. We are humans talking with humans. In the memorable words of the 1971 theme song, we want &quot;a place to stand, a place to grow, Ontari-ari-ari-o!&quot; 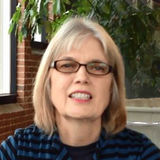