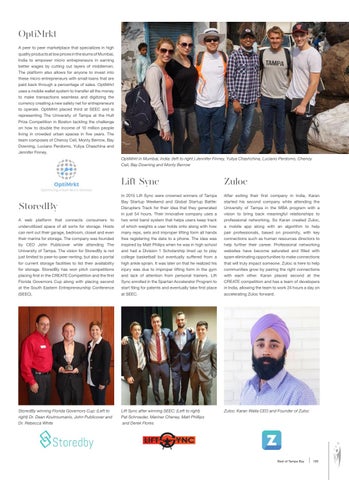 OptiMrkt A peer to peer marketplace that specializes in high quality products at low prices in the slums of Mumbai, India to empower micro entrepreneurs in earning better wages by cutting out layers of middlemen. The platform also allows for anyone to invest into these micro entrepreneurs with small loans that are paid back through a percentage of sales. OptiMrkt uses a mobile wallet system to transfer all the money to make transactions seamless and digitizing the currency creating a new safety net for entrepreneurs to operate. OptiMrkt placed third at SEEC and is representing The University of Tampa at the Hult Prize Competition in Boston tackling the challenge on how to double the income of 10 million people living in crowded urban spaces in five years. The team composes of Chenoy Ceil, Monty Berrow, Bay Downing, Luciano Perdomo, Yuliya Chaschina and Jennifer Finney. OptiMrkt in Mumbai, India: (left to right ) Jennifer Finney, Yuliya Chashchina, Luciano Perdomo, Chenoy Ceil, Bay Downing and Monty Berrow

A web platform that connects consumers to underutilized space of all sorts for storage. Hosts can rent out their garage, bedroom, closet and even their marina for storage. The company was founded by CEO John Publicover while attending The University of Tampa. The vision for StoredBy is not just limited to peer-to-peer renting, but also a portal for current storage facilities to list their availability for storage. StoredBy has won pitch competitions placing first in the CREATE Competition and the first Florida Governors Cup along with placing second at the South Eastern Entrepreneurship Conference (SEEC).

In 2015 Lift Sync were crowned winners of Tampa Bay Startup Weekend and Global Startup Battle: Disrupters Track for their idea that they generated in just 54 hours. Their innovative company uses a two wrist band system that helps users keep track of which weights a user holds onto along with how many reps, sets and improper lifting form all hands free registering the data to a phone. The idea was inspired by Matt Philips when he was in high school and had a Division 1 Scholarship lined up to play college basketball but eventually suffered from a high ankle sprain. It was later on that he realized his injury was due to improper lifting form in the gym and lack of attention from personal trainers. Lift Sync enrolled in the Spartan Accelerator Program to start filing for patents and eventually take first place at SEEC.

After exiting their first company in India, Karan started his second company while attending the University of Tampa in the MBA program with a vision to bring back meaningful relationships to professional networking. So Karan created Zuloc, a mobile app along with an algorithm to help pair professionals, based on proximity, with key connections such as human resources directors to help further their career. Professional networking websites have become saturated and filled with spam eliminating opportunities to make connections that will truly impact someone. Zuloc is here to help communities grow by pairing the right connections with each other. Karan placed second at the CREATE competition and has a team of developers in India, allowing the team to work 24 hours a day on accelerating Zuloc forward. 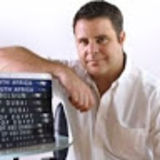