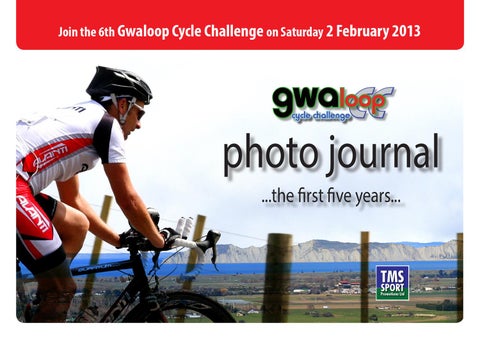 for all details information: www.gwaloop.co.nz

We are a sponsor of the Gwaloop Cycle Challenge and also to the NEW 110km Special race Gisborne to Wairoa Out & Back Course This ‘photo journal’ the first five years has been created, compiled and designed by SheldrakevisualART.com using photos from our own photo library. © Please Note: All photos are subject to © copyright. For further photo details please contact us: em: info@SheldrakevisualART.com ph: +64 6 868 8053

Scroll though this book for scenic views of beautiful Gisborne District. Those who take up the Gwaloop Cycle Challenge can enjoy magnificient views as they compete and complete New Zealandâ&#x20AC;&#x2122;s longest-one-day cycle race.

^^^ The GOLDEN logo was/is used as a unique way of remembering those who participated in the orginal race... <<< Original Poster of the first Gwaloop. Saturday - Labour Weekend 20th October 2007

Stephen Sheldrake - Overall Winner of the FIRST Gwaloop Cycle Challenge in 2007 and again in 2008. His 2008 time remains the course record 5hrs 45min 49sec.

Gisborneâ&#x20AC;&#x2122;s Brent Sheldrake & Josh Barley of Wellington applying the effort out on the course... Inset: An inquisitive onlooker of the equine variety - keeping an eye on proceedings as cyclists passed through his neighbourhood way out past Frasertown...

Two doctors, Deon Stoltz and Jeremy Webber leading the charge as they head back on the Poverty Bay Flats.

Three more 2007 competitors enjoying the final stage as they head back to Gisborne. Inset: Kendall Morgan-Marshall the Ladies second placegetter..... out on the course.

In association with the: Gisborne Cycling Club

Keith Scholes competing in Gwaloop 2008. Keith was a great help to Terry & Kathy Sheldrake, acting as the offical surveyor for the course. Photographed here getting a hands on feel in real time and being chased by Alex Hyland.

2008 leading men head up one of the tough climbs of Stage 3 between Wairoa and Tiniroto. Stephen Sheldrake (Avanti) & Omer Kem (Team Bissell) lead the way with Wellingtonâ&#x20AC;&#x2122;s Josh Barley in pusuit.

Completion of the challenge for these riders of 2008... Keith Scholes, on the left, Malcolm Niven on the right flanking two visiting riders.

Omer Kem and Stephen Sheldrake riding away from the rest of the field as they traverse the steep section of the course on the return to Gisborne...

The sheer delight and excitement of finishing as the Ladies Winner of 2008 would be hard to beat as expressed on the face of Sarah Smallman of Christchurch. Seen here being congratulated by husband Ian after crossing the Finish line. Then being interviewed by TMS Sport Promotions Ltd. Race Director Terry Sheldrake

2009: A chase group also peeling off the Waipaoa River roundabout on the Poverty Bay Flats... led by Nan Baker.

2009: And yet another group peeling off the Waipaoa River roundabout led by Gary Hope.

2009 Ladies Winner - Candice Hammond of Cambridge... on the final Stage 4 returning back and getting close to Gisborne...

2010: Candice Hammond - Overall Ladies Winner leading a group through Manutuke during Stage 1 ...just ahead lay the Wharerata ranges... Insert: Candice being interviewed after the race

2010: Chase group - well out of Frasertown and heading for Tiniroto...

Gisborneâ&#x20AC;&#x2122;s Steve Wolter leading across small bridge out past Frasertown..

Lead Car heads into one of the more scenic areas of the race... Insert: Candice Hammond first woman home...

One of the novel teams (from Canada) that enjoyed the experience of Gwaloop... and want to return to do it all over once again...

Early moments... as the riders head out past the Gisborne Showgrounds Park.

As the 2012 race began - the eventual winner of the Ladies race, Judith May of Auckland was quietly beginning her race at the rear of this group... she would in time ride through the ladies field to set the fastest ladies time ever for Gwaloop... 6hrs. 24min. 56sec.

Nuhaka Roundabout... Stage 2 begins... as Alex Hyland continues to lead the group on the way to Wairoa.

Lead group heading on their way to Wairoa.

2012: Leading group heading for Wairoa... Stage 2 is a relatively easy ride - an undulating section of the race...

Overall Winner Jeremy Vennel ‘Team Bissell’ still at the head of the main group ... this time photographed on the return jouney ‘Stage 3’ between Wairoa & Tiniroto.. coming over the crest of a gentle rise...

The main group... again photographed on the return jouney ‘Stage 3’ between Wairoa & Tiniroto

Gisborneâ&#x20AC;&#x2122;s Callum Gordon with a competitor chasing in earnest through the hill section around Tiniroto...

Lead group descending at speed on route to Tiniroto...

The End Thanks for taking the time to read through this

for Entry details and information: www.gwaloop.co.nz 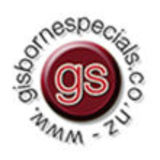 Gwaloop: "the first five years"... 2007 next 2013 The story of the longest One Day Cycle Challenge in New Zealand - Gisborne to Wairoa loop...

Gwaloop: "the first five years"... 2007 next 2013 The story of the longest One Day Cycle Challenge in New Zealand - Gisborne to Wairoa loop...