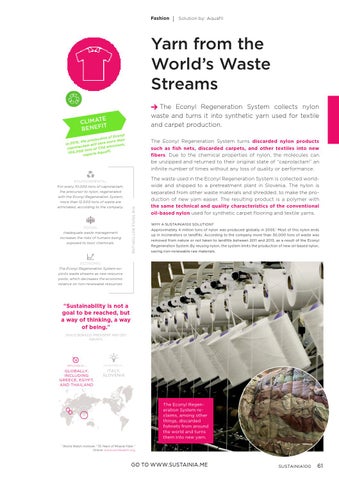 ENVIRONMENTAL For every 10,000 tons of caprolactam, the precursor to nylon, regenerated with the Econyl Regeneration System, more than 12,000 tons of waste are eliminated, according to the company.

The Econyl Regeneration System turns discarded nylon products such as fish nets, discarded carpets, and other textiles into new fibers. Due to the chemical properties of nylon, the molecules can be unzipped and returned to their original state of “caprolactam” an infinite number of times without any loss of quality or performance. The waste used in the Econyl Regeneration System is collected worldwide and shipped to a pretreatment plant in Slovenia. The nylon is separated from other waste materials and shredded, to make the production of new yarn easier. The resulting product is a polymer with the same technical and quality characteristics of the conventional oil-based nylon used for synthetic carpet flooring and textile yarns. WHY A SUSTAINIA100 SOLUTION? Approximately 4 million tons of nylon was produced globally in 2005.1 Most of this nylon ends up in incinerators or landfills. According to the company more than 30,000 tons of waste was removed from nature or not taken to landfills between 2011 and 2013, as a result of the Econyl Regeneration System. By reusing nylon, the system limits the production of new oil-based nylon, saving non-renewable raw materials.

“Sustainability is not a goal to be reached, but a way of thinking, a way of being.” GIULIO BONAZZI, PRESIDENT AND CEO AQUAFIL

GLOBALLY, INCLUDING GREECE, EGYPT, AND THAILAND

The Econyl Regeneration System reclaims, among other things, discarded fishnets from around the world and turns them into new yarn. 1 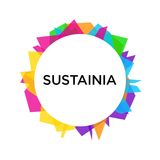 Get inspired by real solutions! The Sustainia100 study 2015 features 100 new stories from the forefront of sustainability innovation. Deploy...

Get inspired by real solutions! The Sustainia100 study 2015 features 100 new stories from the forefront of sustainability innovation. Deploy...