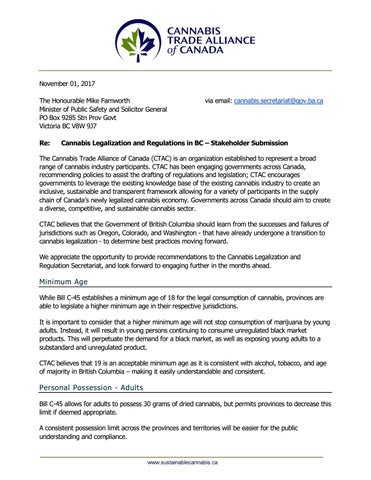 Cannabis Legalization and Regulations in BC â&#x20AC;&#x201C; Stakeholder Submission

The Cannabis Trade Alliance of Canada (CTAC) is an organization established to represent a broad range of cannabis industry participants. CTAC has been engaging governments across Canada, recommending policies to assist the drafting of regulations and legislation; CTAC encourages governments to leverage the existing knowledge base of the existing cannabis industry to create an inclusive, sustainable and transparent framework allowing for a variety of participants in the supply chain of Canadaâ&#x20AC;&#x2122;s newly legalized cannabis economy. Governments across Canada should aim to create a diverse, competitive, and sustainable cannabis sector. CTAC believes that the Government of British Columbia should learn from the successes and failures of jurisdictions such as Oregon, Colorado, and Washington - that have already undergone a transition to cannabis legalization - to determine best practices moving forward. We appreciate the opportunity to provide recommendations to the Cannabis Legalization and Regulation Secretariat, and look forward to engaging further in the months ahead.

Minimum Age While Bill C-45 establishes a minimum age of 18 for the legal consumption of cannabis, provinces are able to legislate a higher minimum age in their respective jurisdictions. It is important to consider that a higher minimum age will not stop consumption of marijuana by young adults. Instead, it will result in young persons continuing to consume unregulated black market products. This will perpetuate the demand for a black market, as well as exposing young adults to a substandard and unregulated product. CTAC believes that 19 is an acceptable minimum age as it is consistent with alcohol, tobacco, and age of majority in British Columbia â&#x20AC;&#x201C; making it easily understandable and consistent.

Personal Possession - Adults Bill C-45 allows for adults to possess 30 grams of dried cannabis, but permits provinces to decrease this limit if deemed appropriate. A consistent possession limit across the provinces and territories will be easier for the public understanding and compliance.

For individuals living in rural communities or with mobility issues, constantly having to travel to obtain small amounts of cannabis is an unnecessary burden. As a society we do not currently restrict the amount of alcohol, caffeine, or tobacco an individual can possess and purchase. Strictly limiting the amount of cannabis an individual can possess does not seem to serve any public health or safety purpose and thus no need to lower possession below 30 grams.

Personal Possession - Youths CTAC believes that establishing a legal prohibition for those under the age of 19 to possess cannabis, which does not result in criminalization, is a reasonable measure. Police officers should have a high degree of discretion, similarly to dealing with youth consumption of alcohol. Confiscating the cannabis products possessed by youths, or issuing an infraction ticket, would be appropriate.

Public Consumption Smoking dried cannabis should fall under smoking bylaws, and the use of inhaled concentrates under ecigarette laws. A public ban on cannabis consumption would be incredibly difficult to enforce. Prohibiting someone from eating a cannabis infused chocolate in public would essentially be impossible to enforce. Purpose-built consumption spaces should also be allowed under a comprehensive provincial cannabis regime. Many British Columbians might not want, or be able to consume cannabis in their homes if they have young children, or if their building restricts smoking on the premises. Similar to alcohol, responsible adults should be able to purchase and utilize cannabis communally in appropriate, safe and regulated settings. Consumption sites that do not allow for sale and purchase of cannabis will simply not be financially viable to operate. If smoking of cannabis is prohibited entirely in public spaces this could result in the de facto banning of cannabis consumption by certain members of the public - such as those that do not have a fixed home address or live in strata buildings that prohibit smoking on their premises. Restrictions around public consumption will inevitably require enforcement actions, which will be costly and counter to one of the goals of legalization - freeing up police resources to focus on issues of greater societal significance.

Drug-impaired Driving Drug impaired driving is a very important issue, and it is important that governments learn from mistakes made in other jurisdictions. Determining impairment based on nanograms of THC in the bloodstream or saliva can be an ineffective manner in which to determine actual impairment. Creating an arbitrary limit that is too low can have the unintended result of banning drivers from ever using cannabis. www.sustainablecannabis.ca

Drug impaired driving is already illegal in British Columbia. Funds would best be used through education campaigns noting the risks of impaired driving. The issue that needs to be addressed is actual impairment â&#x20AC;&#x201C; someone can use cannabis, but not be impaired (based on tolerances, method of ingestion, etc.). Proper public education campaigns will be key. In addition, officers should be properly trained in Drug Evaluation and Classification.

Personal Cultivation It is important to allow for the personal cultivation and production of cannabis. To restrict the personal production of cannabis in an otherwise legalized environment will have a negative impact on individuals, on the health and safety of those individuals, and on the health and safety of the public at large (by driving the activity back underground and into the black market). If the government intends to remove organized crime from the cannabis trade, allowing cannabis to be grown at home should be a central part of the program. If people are allowed to grow their own cannabis, they will have diminished incentive to procure cannabis from the black market. Currently in Canada, people can choose to brew their own beer or grown their own tobacco, or purchase those items through retail outlets. The same framework and options should be available to Canadians when it comes to personal cultivation. A licensing regime for personal cultivation is likely unnecessary and will be financial prohibitive to administer.

Distribution Model CTAC believes that a centralized cannabis distribution system should be avoided for a number of reasons. Cannabis is a very different product than alcohol. It has a different shelf life and requirements for controlled environment. Licensed producers are already required to keep their products in extremely secure vaults far beyond what is seen in alcohol processing facilities, making the need for secure centralized warehouses redundant. Adding layers in the supply chain between producers and consumers will result in higher costs for the province as well as for the consumer. It is important to keep prices low in order to remain competitive with the black market and erode demand for illicit product. A direct distribution model where producers distribute their product directly to retailers, and to consumers via e-commerce, is more effective. Additionally, centralized government distribution restricts the ability of entrepreneurs such as nursery operators, cultivators, processor and retailers to negotiate their own margins. If the barriers to access distribution and retail channels are too high, smaller producers may not be able to achieve the necessary production capacity to enter the system. The key is to create a distribution system that is not overly burdensome for regulators or stakeholders. www.sustainablecannabis.ca

To control cannabis access in British Columbia, CTAC recommends the province commission a centralized inventory control software that all cannabis businesses are forced to use such as Metrc which is used by state governments to track all cannabis transactions in Alaska, Colorado, Oregon, Michigan, and Maryland.

Retail CTAC advocates for government regulated, privately owned cannabis retail outlets. Creating either a monopoly or oligopoly with respect to retail is not needed to properly control cannabis access. A government run retail model will require significant investment of taxpayer dollars, that could be better spent on other necessary services. One of the main aims of legalization is the elimination of the black market. This is more easily achievable through independent retail. A legal retail experience must be competitive with respect to the black market in both product innovation as well as pricing. Both of these are created through competition in the private sector. It is important to recognize that Cannabis retailers create private sector jobs and serve Canadian communities by offering safe, accessible spaces where consumers can obtain in-person advice, view, and purchase a wide range of available cannabis options. Online e-commerce with direct to consumer sales is also recommended. This service is already offered in the black market, and if not offered in a legalized framework will continue to operate to serve demand. E-commerce is also important for citizens that live in rural areas or have mobility issues that might have difficulty accessing cannabis from a brick and mortar store.

Additional Recommendations Federal responsibilities CTAC believes that there are several aspects of cannabis legalization that are currently regulated by the Government of Canada, but that the province of British Columbia should be actively engaging their federal counterparts on. Product availability: Currently Bill C-45 severely restricts the types of products that will be available in the legal recreational cannabis marketplace. It is important that products that already exist in the black market, and for which there is a high level of demand, are available to consumers in the regulated marketplace. Otherwise this will result in niche areas in which the black market will continue to thrive. Potency: The federal task force recommended against capping potency in the adult use market. This will again result in pushing demand for these products towards the black market. Additionally, issues related to potency and psychoactivity are far more complicated than simply restricting THC levels. Different products with similar levels of THC potency, when consumed through different methods, may have markedly different psychotropic effects. It is essential that governments more closely study this www.sustainablecannabis.ca

issue and adhere to good public policy rather than myths that have existed in the black market for decades. Production capacity: It has become clear that Licensed Producers are currently not producing enough cannabis to supply the demand that will result from legalization. The process to become licensed is incredibly onerous and time consuming. In order to meet demand Canada will have to license hundreds if not thousands of producers. Far more than the 68 currently licensed to produce cannabis. While oversight of production currently falls to the federal government, the provincial government should advocate for the ability to license, permit, and regulate small scale producers. This will allow many British Columbians that currently work in the â&#x20AC;&#x153;greyâ&#x20AC;? cannabis industry to transition into a fully regulated business, as well as supply additional product to the under-supplied legal market. Testing: There is a need for more licensed laboratories. Currently there is nowhere near enough to meet demand, and there is a dearth of standardization between existing laboratories. This is an area the province should be very concerned about, to ensure that consumers are purchasing a safe product. CTAC recommends creating a cannabis monograph, similar to what was recently done in Germany, for testing labs. The problem that currently exists worldwide in cannabis testing is lack of consistency. Labs all use different standards, different equipment, different assumptions, leading to vastly different testing results. This poses a real challenge to businesses and to product safety. Pardons, amnesty and expungement: The province should advocate for pardons, amnesty and expungements for British Columbians that have been convicted of minor cannabis related offences. These convictions severely limit the ability of many British Columbians to seek gainful employment, travel freely, and contribute to society. Additionally, those that have convicted for a minor offense that will now be legal should be allowed to participate in the new legalized framework.

Conclusion The Cannabis Trade Alliance of Canada appreciates the opportunity to provide recommendations to the Cannabis Legalization and Regulation Secretariat. We look forward to continuing to work closely with ministry staff to develop inclusive public policy that will allow for a safe, thriving and mature cannabis industry to flourish in British Columbia. Thank you for allowing us to provide our input on this important initiative. Kindest regards, 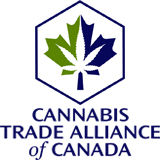