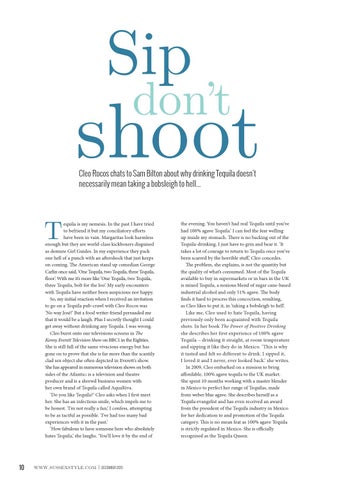 equila is my nemesis. In the past I have tried to befriend it but my conciliatory efforts have been in vain. Margaritas look harmless enough but they are world-class kickboxers disguised as demure Girl Guides. In my experience they pack one hell of a punch with an aftershock that just keeps on coming. The American stand up comedian George Carlin once said, ‘One Tequila, two Tequila, three Tequila, floor’. With me it’s more like ‘One Tequila, two Tequila, three Tequila, bolt for the loo’. My early encounters with Tequila have neither been auspicious nor happy. So, my initial reaction when I received an invitation to go on a Tequila pub-crawl with Cleo Rocos was ‘No way José!’ But a food writer-friend persuaded me that it would be a laugh. Plus I secretly thought I could get away without drinking any Tequila. I was wrong. Cleo burst onto our televisions screens in The Kenny Everett Television Show on BBC1 in the Eighties. She is still full of the same vivacious energy but has gone on to prove that she is far more than the scantily clad sex object she often depicted in Everett’s show. She has appeared in numerous television shows on both sides of the Atlantic; is a television and theatre producer and is a shrewd business women with her own brand of Tequila called AquaRiva. ‘Do you like Tequila?’ Cleo asks when I first meet her. She has an infectious smile, which impels me to be honest. ‘I’m not really a fan,’ I confess, attempting to be as tactful as possible. ‘I’ve had too many bad experiences with it in the past.’ ‘How fabulous to have someone here who absolutely hates Tequila,’ she laughs. ‘You’ll love it by the end of

the evening. You haven’t had real Tequila until you’ve had 100% agave Tequila.’ I can feel the fear welling up inside my stomach. There is no backing out of the Tequila-drinking. I just have to grin and bear it. ‘It takes a lot of courage to return to Tequila once you’ve been scarred by the horrible stuff,’ Cleo concedes. The problem, she explains, is not the quantity but the quality of what’s consumed. Most of the Tequila available to buy in supermarkets or in bars in the UK is mixed Tequila, a noxious blend of sugar cane-based industrial alcohol and only 51% agave. The body finds it hard to process this concoction, resulting, as Cleo likes to put it, in ‘taking a bobsleigh to hell’. Like me, Cleo used to hate Tequila, having previously only been acquainted with Tequila shots. In her book The Power of Positive Drinking she describes her first experience of 100% agave Tequila – drinking it straight, at room temperature and sipping it like they do in Mexico. ‘This is why it tasted and felt so different to drink. I sipped it, I loved it and I never, ever looked back.’ she writes. In 2009, Cleo embarked on a mission to bring affordable, 100% agave tequila to the UK market. She spent 10 months working with a master blender in Mexico to perfect her range of Tequilas, made from weber blue agave. She describes herself as a Tequila evangelist and has even received an award from the president of the Tequila industry in Mexico for her dedication to and promotion of the Tequila category. This is no mean feat as 100% agave Tequila is strictly regulated in Mexico. She is officially recognised as the Tequila Queen.