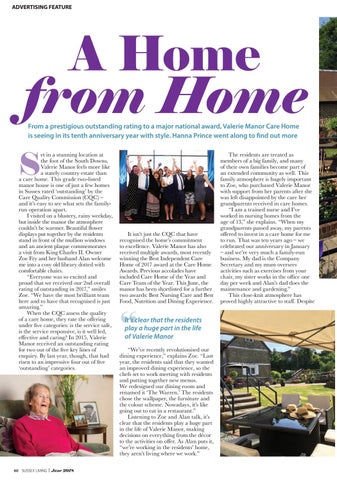 A Home from Home From a prestigious outstanding rating to a major national award, Valerie Manor Care Home is seeing in its tenth anniversary year with style. Hanna Prince went along to find out more

et in a stunning location at the foot of the South Downs, Valerie Manor feels more like a stately country estate than a care home. This grade two-listed manor house is one of just a few homes in Sussex rated ‘outstanding’ by the Care Quality Commission (CQC) – and it’s easy to see what sets the familyrun operation apart. I visited on a blustery, rainy weekday, but inside the manor the atmosphere couldn’t be warmer. Beautiful flower displays put together by the residents stand in front of the mullion windows and an ancient plaque commemorates a visit from King Charles II. Owner Zoe Fry and her husband Alan welcome me into a cosy old library dotted with comfortable chairs. “Everyone was so excited and proud that we received our 2nd overall rating of outstanding in 2017,” smiles Zoe. “We have the most brilliant team here and to have that recognised is just amazing.” When the CQC assess the quality of a care home, they rate the offering under five categories: is the service safe, is the service responsive, is it well led, effective and caring? In 2015, Valerie Manor received an outstanding rating for two out of the five key lines of enquiry. By last year, though, that had risen to an impressive four out of five ‘outstanding’ categories.

It isn’t just the CQC that have recognised the home’s commitment to excellence. Valerie Manor has also received multiple awards, most recently winning the Best Independent Care Home of 2017 award at the Care Home Awards. Previous accolades have included Care Home of the Year and Care Team of the Year. This June, the manor has been shortlisted for a further two awards: Best Nursing Care and Best Food, Nutrition and Dining Experience.

The residents are treated as members of a big family, and many of their own families become part of an extended community as well. This family atmosphere is hugely important to Zoe, who purchased Valerie Manor with support from her parents after she was left disappointed by the care her grandparents received in care homes. “I am a trained nurse and I’ve worked in nursing homes from the age of 13,” she explains. “When my grandparents passed away, my parents offered to invest in a care home for me to run. That was ten years ago – we celebrated our anniversary in January – and we’re very much a family-run business. My dad is the Company Secretary and my mum oversees activities such as exercises from your chair, my sister works in the office one day per week and Alan’s dad does the maintenance and gardening.” This close-knit atmosphere has proved highly attractive to staff. Despite