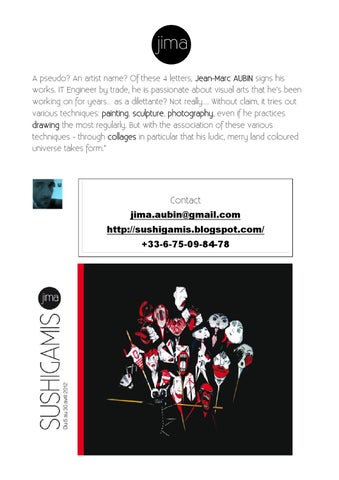 A pseudo? An artist name? Of these 4 letters, Jean-Marc AUBIN signs his works. IT Engineer by trade, he is passionate about visual arts that he’s been working on for years… as a dilettante? Not really…. Without claim, it tries out various techniques: painting, sculpture, photography, even if he practices drawing the most regularly. But with the association of these various techniques - through collages in particular that his ludic, merry land coloured universe takes form.”

JIMA has added a 3D dimension to his last works. By staging his characters – that he calls sushigamis – made our of folding paper - by displaying them on his collages, his photographs, or quite simply laid out regularly on a plain background. In 'Sushis' , the small white and red characters laid out on a black background remind us of insect boards. The effect is accentuated by the use of a three quarter canvas. In this very graphical series at first sight, we discover an incredible diversity of characters – all unique. JIMA even says that it is difficult to reproduce twice identically the same character. With each new folding, a new creature will be born, with its own expressions as well as in its posture as in its face’s expression JIMA also creates character families, such as tribes who have their own fashion codes, who are self-sufficient suspended or in CD boxes. It’s also in the fixing process that JIMA gives to his work a ‘Product’ dimension, lucid and accessible. We can think of the Samurais series, the Lotos, the Black Warriors, the Motus… In JIMA’s last works there are many references to Japan or Asia Of course, when practising folding we think of Origami – antique art (6th century) of thousand-year-old Chinese origin imported to Japan… Even if it’s an obvious, JIMA claims the originality of its own models - by thwarting the origami rules. Even if the origami uses a sheet of paper, usually in a square form that one does not cut out in theory, JIMA uses various paper shapes and will carry out an assembly of them to extend their possibilities, and to feed in his creativity. JIMA draws, colours, adds reclaimed elements (feathers, wire, stickers…) affixed on the folding itself to give it life. Telling a story is what’s more important for JIMA – to illustrate an expression - and to corroborate with its ludic universe. JIMA confesses that he gets inspired by the calligraphy, the mangas, the samurais, the ' Little People' who populate Haruki Murakami’s last novel, 1Q84, integrating them little by little in his last series of work.