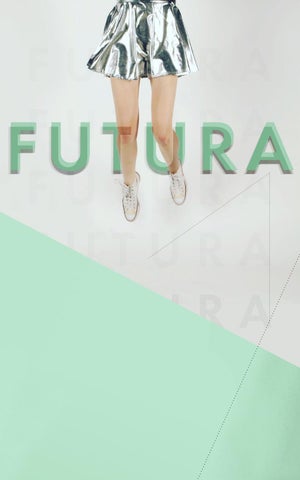 One topic that has captivated the imagination for centuries is the future. Even pre-dating the rise modern technology, there was a feeling of wonder at what future generations might accomplish in the years to come. As the world saw technology boom and develop at dizzying speeds, the expectation of the future changed to reflect that, now dreaming of faster, sleeker, more innovative technologies. We wonder what will the world in the year 2104 look like? Could absolutely anything be done in a mere instant? Would everything we know today be replaced by something better? What would the world of the future say... ...and how would it send that message?

Futura also has oblique letterforms and a condensced family, which adds to Futuraâ&amp;#x20AC;&amp;#x2122;s versatility as a typeface - this is part of why it is used in industrial design so prevalently.

Futura as a family contains several fonts, with varying weights from Book to Extra Bold. Medium and Demi, shown left, illustrate minor differences in angles between weights of Futura.

Futura shares concepts with Bauhaus, using geometry to create its letterforms. Most are formed using squares, triangles and near-circular forms, making for a modern and minimalist look.

URA Space exploration seems likely to be a major part of the future, be that visiting outer space or exploring visual space within design. Photo credit Meena Khalili.

THE FUTURIST TYPEFACE To travel to the future, You only need one thing. Not rockets, speed, or star dust, No moon rocks need you bring. See letters, words are timeless. They’ve long outlived the past. They’ll be there in the future, A time approaching fast. So if you wish to travel, Make sure your words are clear. Take care to choose a typeface, That will not disappear. Futura is the vessel, To take you near and far. It’s been here since the 20s, And still it is a star. Geometry and structure, Do both these letters grace. So venture with Futura, The futurist typeface.

Using long-exposure technology, it is possible to draw with light. By aiming a flashlight at the camera and moving, one can create glowing words of color.

During the early research on Futura, it quickly became apparent that it is just as important to look into the ideas behind this typeface - not just its design. Futura is not only a geometric typeface. It was intended to express a sense of futurism and modern design. Its creator, Paul Renner, did not think a typeface should simply revive what has come before, but rather felt that it should reflect modern ideas. Sharing many traits with the Bauhaus, the final typeface is geometric, clean, and minimalist. Expressing a streamlined future, Futura has all unecessary details completely removed.

After base research proposed a theme of futurism, the challenge then was how to present this idea along with the typeface. In the process of creating an experimental representation of Futura, the challenge then became a physical research process. Tracing the letterforms allowed for in-depth study of its design. Paul Renner has been quoted on saying that he wished to remove all trace of the human hand in his design for Futura. As attempting to trace the letterforms proved, his design was a fantastic success, and very difficult to replicate by hand.

Information will go here once it is formally decided. For now here is filler text.

The Story of Graphic Design by Patrick Cramsie Futura by Fonts in Use fontsinuse.com Paul Renner: The Art of Typography by Christopher Burke

This zine was a study of the typeface Futura. In it, Futura was explored through writing, experimentation, research, and even costume, all unified by a retro-futuristic theme. 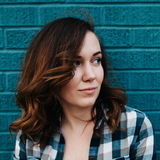