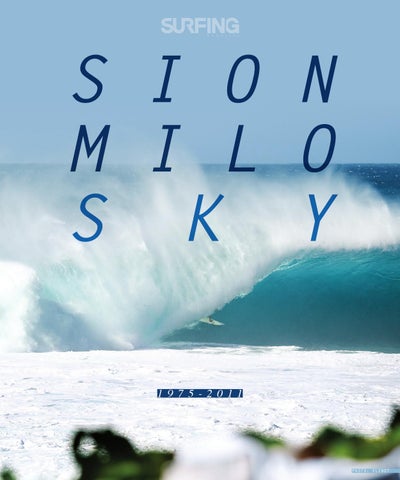 admiration to the memory of Sion, and to the family that now survives him. Aloha.

soon as the next swell comes.”

Those were Sion Milosky’s words following his virgin trip to Maverick’s in late 2010. It’d be another four months until Sion would return for what would be his second and final go at the Northern California big-wave break with which he’d fallen in love at first ride. But in those four months, Sion cemented a legacy — a last-minute rise from obscurity into the annals of big-wave greatness, now preserved in the minds, words and images of this fading winter season. Sion earned his place on magazine covers and in conversations where no 35-year-old Kauai-bred welder should really belong. But there he was: at Pipe, Rockpiles, the outer reefs, and ultimately, Maverick’s again. One last time. Sion wasn’t slowing down. He was ascendant. The past two years were the best of his surfing life and one can only guess at what more the future might have held. Sion was our North Shore Underground Surfer of the Year; he was a father, a husband, a friend; he was an inspiration. He wasn’t done.

“I went to Tahiti on a surf trip with Sion last year. There was gonna be a huge swell and we chased it down there with some other close friends. It was Sion’s first trip to Tahiti and he was so excited to be going someplace new, so stoked to get on a plane to chase surf. He was starting to really live his dream and he seemed so grateful for the gifts in his life. I will remember his classic smile when the surf was so big that everyone else was scared. I will remember him as a dedicated family man who loved his wife and daughters. I will remember him as someone who set an example for his friends to be that much better, in the water and on land. Sion, you are already missed.” — S h a n e D o r i a n

Sion was a hard worker During this seasonâ&amp;#x20AC;&amp;#x2122;s North Shore Underground project, Sion was by far the most proactive of the group. He surfed hard, gathering footage

hustling phone calls to be helpful to his cause. He saw the opportunity at hand and grabbed it.

sion was a family man Along with about 80 other people, Sion and his family spent Thanksgiving this year at Kohl Christensen’s Oahu farm. They ate, played and made paper Indian hats. Sion’s was a life worth imitating — a stunning wife, adorable and friendly children, his own business and a big-wave habit. His family looked at him with adoring eyes.

sion on the far right, in the striped shirt. anchoring. Photo: flindt

“Sion was true inspiration in its purest form. His humble yet jaw-dropping approach to surfing the heaviest waves in the world will be forever remembered by everyone who was blessed to know him.” —Kohl Christensen

project, three magazine covers and countless spreads in local and international publications, Sion had no illusions that surfing would be his cash cow. He said, “I’ll be doing [metalworking] for the rest of my life.” And he said it with a smile on his face.

er being interviewed about his welding business or just asked about the last swell, Sion was energetic and thankful. He made an effort to let you know that he appreciated your thinking about him and that he was just stoked to be living the life he had.

At Mav’s late last year, on a day that Sion dominated, he at one point scratched into a solid 20-foot wave. The bowl was doubling up and he caught the chip shot from the top section. It seemed there was no way he’d make it over the ledge, that he’d just launch off of the wave’s crease and into the pit. But he hopped a couple of times and then pounded his front foot down, making the drop. If there was even the slimmest chance he could make it, he went. And he usually pulled it.

ing to Oahu from

spoke to us about

Sion Milosky, November 2010: I’ve been wanting to go there for a long time. The swell appeared, and once we decided Mav’s was the spot, I flew out a day early to meet Nate [Fletcher] in Santa Cruz. Everyone expected a super huge swell, so the day before everyone was pretty psyched. It was nuts. We couldn’t sleep, so we got up at four in the morning, put our wetsuits on and got to the harbor way too early in pitch darkness. We were pretty much the first ones at the harbor. Since this was my first time paddling out to this spot, I paddled real slow to get a feel for the ocean, studied landmarks, took mental notes of everything — like the lineup, the wave, where experienced guys were sitting, and just slowly eased myself to where I thought I wanted to sit. The vibe out there was really intense because everyone anticipated the swell to be crazy huge. Everyone was cool, but serious. I let a few waves go by and I knew I needed to catch one to get it out of the way. So I finally caught one and paddled back out and tried to position myself to get a little bigger one and caught a couple more. It was intense because it was supposed to get bigger as the day went on, so I was trying to take time to ease into it. I didn’t know if was going to be paddling back out when the big bombs started to show, so I paced myself while still getting comfortable and figuring out the spot. When the sets started getting bigger, the winds came onshore and got super windy and dangerous, so I decided to go take a break and watch from the Ski. I was bummed that I couldn’t get the big part of the swell due to the wind coming on. We ended up going in, and that’s when the whole day turned around. As soon as we got in, from the highest of highs of surfing, we checked our phones and got messages that Andy [Irons] had passed away that morning.

So we went from highest of highs to the

lowest of lows. The mood and everything shifted.

“I know you probably heard by now, and I am so sorry to hear about Sion. Let me know if you need to talk,” my girlfriend wrote me in an email that I received on a layover in San Salvador. I didn’t know. I logged onto Facebook and scrolled down the page. The posts made my throat tighten, “RIP Sion… was surfing better than anyone all day…legend…as big as last year’s contest…surfed a wave straight into heaven…a foundation is being set up…” I cried. I cried for his wife and two daughters. For his friends. For the surfing community. For Kauai. I wanted to learn the details, but my flight was boarding. I found my seat and brought out my note pad. But what do I write? I barely knew him. I don’t know if he “never said a bad thing about anyone” or if he “lit up a room” or if any of the other memorial clichés applied to him. He was just an acquaintance. Just a hero. Like the rest of the surf world, I wish I’d been introduced to Sion sooner than I was. He showed up to the big-wave party fashionably late, blew our minds, and left us wanting more. I have no idea if this is the way Sion would have wanted to die, but it was certainly the way he wanted to live. And he lived well. —Taylor Paul, SURFING Magazine Associate Editor

THE SION MILOSKY MEMORIAL FUND In December, Sion won $25,000 through the Vans and SURFING Magazine North Shore Underground program with the intention of financing future surf trips. Vans will contribute the entire amount to a special memorial fund that has been established to assist Milosky’s wife and children:

A sincere mahalo for your kind support. Our deepest condolences go out to Sion’s family and friends.

Dedicated with admiration to the memory of Sion, and to the family that now survives him. Aloha. 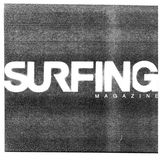