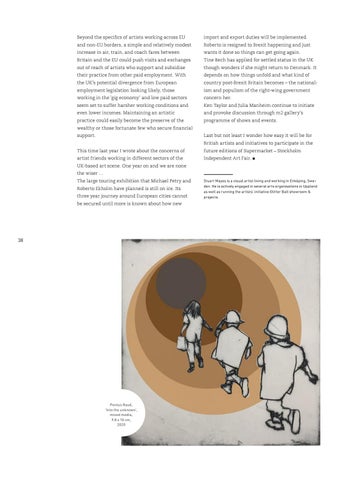 Beyond the specifics of artists working across EU

import and export duties will be implemented.

and non-EU borders, a simple and relatively modest

Roberto is resigned to Brexit happening and just

increase in air, train, and coach fares between

wants it done so things can get going again.

Britain and the EU could push visits and exchanges

Tine Bech has applied for settled status in the UK

out of reach of artists who support and subsidise

though wonders if she might return to Denmark. It

their practice from other paid employment. With

depends on how things unfold and what kind of

the UK’s potential divergence from European

ism and populism of the right-wing government

working in the ’gig economy’ and low paid sectors

even lower incomes. Maintaining an artistic

and provoke discussion through m2 gallery’s

practice could easily become the preserve of the

programme of shows and events.

artist friends working in different sectors of the

UK-based art scene. One year on and we are none the wiser … The large touring exhibition that Michael Petry and Roberto Ekholm have planned is still on ice. Its three year journey around European cities cannot be secured until more is known about how new

Stuart Mayes is a visual artist living and working in Enköping, Sweden. He is actively engaged in several arts organisations in Uppland as well as running the artists’ initiative Glitter Ball showroom & projects. 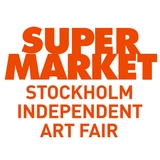 As Supermarket – Stockholm Independent Art Fair 2020 was transformed into SUPERLOCAL 2020, the artist-run Supermarket Art Magazine #10 has a...

As Supermarket – Stockholm Independent Art Fair 2020 was transformed into SUPERLOCAL 2020, the artist-run Supermarket Art Magazine #10 has a...